Wind lights up lives in a Vietnamese village 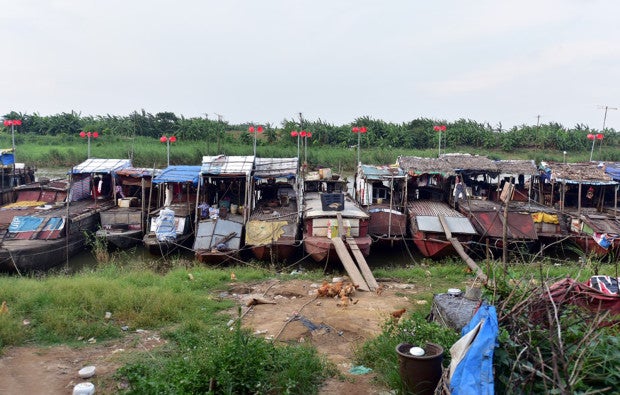 Just two kilometers from the hustle and luxuries of Hanoi’s town centre, the life of families living in slums along the Red River has been the same for years: poor, partly submerged, dark at night.

Access to electricity is limited: residents have to spend around $15 a month for power, a considerable amount for those who mainly earn their livings by collecting scraps or trading pottery. So when the sun goes down, it often means lights out.

Two months ago, someone decided to bring some light to this place.

Ten wind turbines made of recyled materials were installed above 10 rickety wooden houses surrounded by water. From afar, they look like 10 big red flowers spinning against a backdrop of green fields and a banana forest.

The wind power system was invented by Le Vu Cuong, a lecturer at the Ha Noi University of Business and Technology, and funded by Plan International Vietnam, a humanitarian organization, and other donors.

The system consists of plastic bowls installed on a horizontal windmill contraption and then attached to metal poles. It is connected to a generator made from the motor of a broken printer. Energy is provided every time the wind blows.

The energy is then stored in old motorcycle batteries, which can illuminate lamps with a brightness equivalent to a 45-Watt light bulb.

Cuong’s wind-powered generator makes use of materials that are cheap and easy to replace and works with a wind speed of just 0.4 meters (1.3 ft) a second. It costs about 1 million dong (US$45) for the whole system.

“When my group carried out research, we found that the natural conditions at this place are suitable for small windpower turbines. The residents living here are poor. We wanted to support them. They can now use electricity without extra cost, and one important thing is that the energy comes from renewable sources,” Cuong said.

Although the output generated is small, it is enough to light a boat for up to four hours, depending on the wind speed.

Cuong, who won many prizes for his green and energy-efficient works, said he spent three months working on the system.

“Due to limited financial resource, I have to use motors from broken printers, of which both capacity and output are moderate. I also tried many kinds of materials for the blades – and ended up with the plastic bowls you’ve seen – they are cheap and easy to replace,” he said.

But when the system was completed – it was not easy for him and his group to have it installed.

“Residents refused to let us come and install the system, they thought we were selling something, and they have had bad experience with strangers,” he said.

Tran Van Xuan, a resident of the village, was the one who finally agreed to work with the group – after they paid three visits to his home. Now he said he was glad he did so.

“We have to pay more for electricity because we live too far from a power station and we can only afford small amounts of it. With this windpower turbine, we can light a bulb when it’s dark, for free. Of course we’re happy about that. Everyone here is happy about that,” Xuan said.

Most of the 14 families in the village now use the wind power system, saving up to one-third of their electricity bills per month.

“But we would be happier if the power were stronger and could run an electric fan,” he added.

Cuong, who adores the life and work of famous American architect Frank Gehry, wants to take his project to other impoverished areas in Viet Nam and is working to raise funds. He’s also coordinating with other experts to improve the current system so it can work more effectively.

Vietnam produces just 140 MW of wind power each year, but officials say it has the capacity to produce 500 times more.

Pham Trong Thuc, head of the Renewable Energy Department under the Ministry of Industry and Trade, said Vietnam needs to foster renewable energy. The ministry plans to increase the production of windpower to 800 MW by 2020 and 6,000 MW by 2030.

The ministry also encourages investments in the windpower sector in central and southern areas of Vietnam, where the potential for development is high. In late May, General Electric signed a Memorandum of Understanding (MOU) with the ministry to develop a minimum of 1,000MW of new wind farms by 2025.