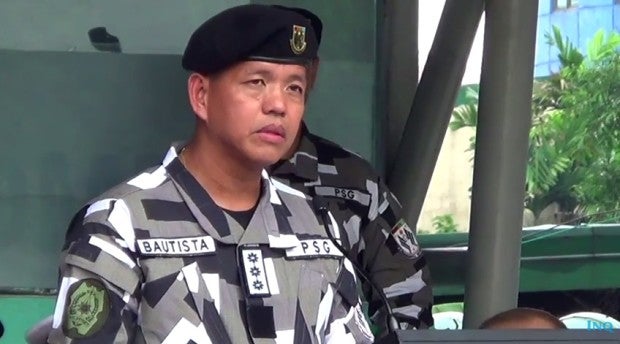 He was the commander of the Army’s 104th Brigade in Basilan when the Moroccan militant Mohammad Khattab was killed in clashes last April.

It was also during his stint in Basilan when 18 soldiers and five members of the Abu Sayyaf were killed in clashes also last April.

Macario, a member of the Philippine Military Academy Class of 1985, was charged with violating Articles of War for the bloody Al-Barka clash in 2011.

Nineteen members of the Special Forces were killed in the operation during an encounter between the Army and  the Moro Islamic Liberation Front in Basilan.

He was immediately relieved of his post as the chief of Special Operations Task Force Basilan. He was later acquitted by a court martial.

“Bearing a star on one’s soldier symbolizes the pennant of a fruitful military career after overcoming bumps and obstacles along the way. Your new rank testifies to the trust and confidence of the command in your ability to manage greater responsibilities befitting the stars on your shoulder,” said Año.

He also reminded the officers that that their core competency was still warfighting, but at the same time they would support the Philippine National Police’s campaign against drugs and all forms of criminality. JE/rga

Read Next
Young mom arrested for taking nude photos, videos of daughters
EDITORS' PICK
Manila is 78th most expensive city in the world for foreign workers
TeaM Energy pushes development programs to help in pandemic rebound
Want to help local farmers? Shop small and eat Real Food
Piolo Pascual: The Ultimate Heartthrob continues to level up
ICC is everything but a court of ‘white people’
Garcia softens stance, meets IATF halfway on swab-upon-arrival policy
MOST READ
Sharon Cuneta on living in the US: ‘Nagagawa ko lahat ng normal na bagay’
Mike Nieto asks fans: ‘No below the belt remarks’ toward South Korea
ICC is everything but a court of ‘white people’
Duterte-Duterte tandem possible but ‘winnability is another question’ — Binay
Don't miss out on the latest news and information.