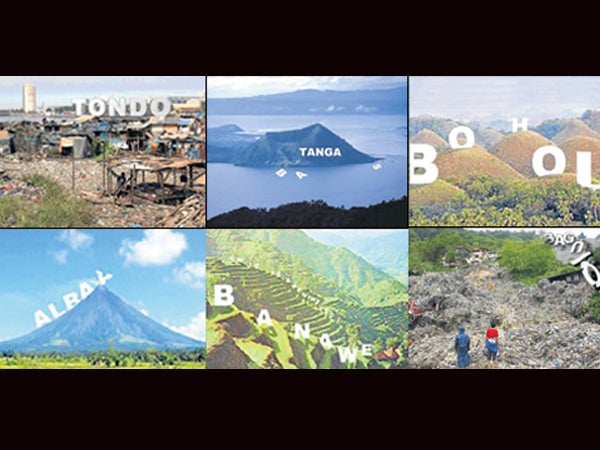 It triggered an eruption of ridicule.

Netizens with PhotoShop skills particularly feasted on the scheme, which was recently endorsed by the provincial council as a potential tourist attraction. The plan, according to Vice Governor Mark Leviste II, was to put up 14-meter-high letters spelling out  “BATANGAS” along the contours of the scenic volcano.

Taal Volcano, world-famous for its location within a freshwater lake, became a popular trending topic on Twitter and on Facebook pages, which mocked and rallied opposition to the plan.

In an interview with the Philippine Daily Inquirer, Santos on Thursday appealed to the public not to “overreact,” saying the plan was “not yet final” and still subject to consultations.

“It’s not as if it’s a done deal or there’s already an allocated budget for the construction. It was just a plan that was tackled in a meeting,” the governor said on the phone.

But the firestorm has already started. Singer-composer Jim Paredes tweeted: “This is horrific. Vilma Santos et al, wake up!”

“Why spoil a natural beauty? Why the need to copy Hollywood? This is God-given natural beauty and nothing can be added to (further) beautify it,” a user named Glenn posted on the Inquirer website.

“I don’t see the logic. It will just destroy and cover the beauty of Taal itself,” said another reader.

Facebook user Bing Yenko Kasilag wrote: “NO NO NO TO THIS!!! Ate Vi, please leave Taal Volcano and the lake alone. Do not mar the natural beauty of the scenery. It doesn’t belong to Batangas alone but to the entire nation. Get rid of the all illegal fish pens instead.”

A newly opened Facebook group named “Hollywood Pilipinas” had one post that asked: “Why not just brand the whole country that way?”

He said having the sign would also assert the “identity” of Taal as part of Batangas and not of Tagaytay City, which has a thriving tourism industry owing to its spectacular view of the volcano and the lake. Tagaytay lies in the neighboring province of Cavite.

Tacky, a waste of taxes

Other netizens called the plan “ridiculous and tacky” and “a stupid, ugly and a waste of taxpayers’ money.”

Ivan Henares, vice president and trustee of Heritage Conservation Society, wondered on Twitter: “How could Taal Volcano be honored as a Unesco World Heritage site if it won’t be taken care of?”

And on his group’s Facebook page, Henares added: “It won’t stand a chance kung matuloy yan (if that plan pushes through).”

In a statement addressed to critics and posted on INQUIRER.net, Leviste echoed Santos’ explanation, saying the provincial government was “still in the process of studying the idea.”

“I will welcome and appreciate any and all comments, ideas, suggestions even objections for as long as it is not personal.  Thank you!” said the vice governor.

“That’s why we conducted a public consultation/committee hearing regarding the proposed Batangas sign—to study all possibilities. We also informed the different government agencies about the said hearing so that we can record all their inputs,” he said.

Santos said she was greeted by a barrage of “negative comments on the Internet” when she woke up Thursday.

She said the proposal to put up a huge sign on the island had been discussed with the Protected Area and Management Board, which is tasked to oversee the lake and the volcano.

The board, Santos noted, included representatives from the Department of Environment and Natural Resources (DENR), the private sector, fisherfolk organizations and the mayors of the towns surrounding Taal Lake.

In that meeting, various suggestions were made on how to best protect and promote Taal Lake as a provincial treasure. “We wanted a landmark that will identify Taal as part of Batangas,” she stressed.

But Santos said what was actually suggested was a sign that would read “Ala Eh”—a Batangueño expression—and not “Batangas.”

This was contrary to Leviste’s announcement, which was also reported on the website of the government-run Philippine Information Agency on Wednesday.

She said there had been a widespread misconception that Taal was part of Tagaytay since the latter offered “the best views of the lake and volcano.”

But again, she maintained, “we have to study the plan carefully and consult various government agencies, including the DENR and Phivolcs (Philippine Institute of Volcanology and Seismology) first.”

In the aftermath of the massive fishkill that hit Taal Lake earlier this year, the provincial government had been working double-time to come up with  “alternative livelihood projects for those who will be displaced by the closure of fishpens,” Santos said.

It was in this light that the idea of converting the lake into an ecotourism destination was brought up, she said. “Tourism would spell more jobs in the province.”

By reclaiming Taal Lake and Volcano as their own, “the people of Batangas will hopefully learn to cherish and protect it,” she said.

Santos said it also saddened her that the issue got blown out of proportion because of “politicking” and the noise it was generating could be used by her political opponents in time for the 2013 elections.

“Bahala sila sa buhay nila (Let them have their way). I have no time for politicking,” said the governor, who is on her second term and could still run for a third. “I’m not motivated by self-interest. I am just here to serve the people of Batangas the best way I can.”

Also, she said: “We are not fighting with the people of Tagaytay. There’s no bad blood between (its) Mayor Abraham Tolentino and Batangas. In case of a natural calamity, Tagaytay will be our partner in evacuating and saving our people.” With a report from Ana Roa, Inquirer Research