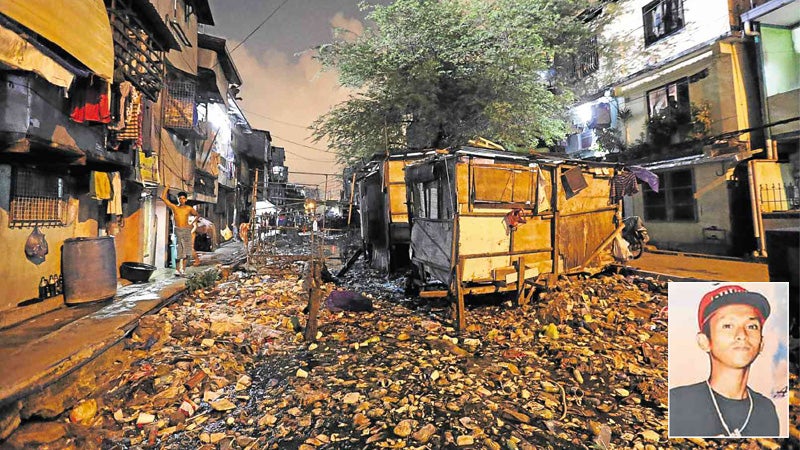 DARK SIDE OF DRUG WAR Stuck in a swamp of trash in the middle of an estero is the shanty of Michael Siaron (inset) and his wife, Jennilyn Olayres, at Barangay 145 in Santo Niño, Pasay City. Siaron, a suspected drug pusher who was shot dead by motorcycle-riding gunmen, was the subject of a stirring Inquirer photograph that has sparked calls for a stop to summary executions amid a government campaign against illegal drugs. RAFFY LERMA

That is the message of Jennilyn Olayres to President Duterte, whose war on illegal drugs had taken the life of her husband, Michael Siaron.

Olayres (not Olaires as earlier reported) will bury her husband on Wednesday, 11 days after motorcycle-riding men shot him dead at Pasay Rotunda on Edsa and Taft Avenue.

She conceded Siaron, 29, was a drug user, but she said it was impossible that  he was a dealer because they were too poor and could barely pay for their next meal.

He voted for Mr. Duterte in the May 9 presidential election, Olayres said in an interview with the Inquirer on Sunday.

Olayres, 26,  is not a registered voter, but she said she, too, would have voted for Mr. Duterte “because we wanted an end to crime.”

Six weeks after Siaron cast his vote for the candidate who promised to wipe out the illegal drug trade, he became part of the statistics, falling along with five other men gunned down by suspected vigilantes in Pasay and Manila early on July 23.

The night before he was gunned down, Siaron had dinner at his father’s  fruit stall at the rotunda and bought a P30-“lumpiang shanghai” meal for his wife. Then he returned to his job, never to come home again.

From their shack built on a trash-clogged creek in Barangay Santo Niño in the rundown part of Pasay City, Olayres ran barefoot to Taft Avenue when a friend called out that Siaron had been shot.

Recalling the moment she found her husband’s body, she said she thought he was just hit by a stray bullet and could still be alive. But he was dead.

“When I was cradling him, I was thinking, ‘How long have you been lying here?’ Nobody bothered to help him. I was furious,” Olayres said, speaking at the Santo Niño barangay hall under the elevated tracks of the LRT where the body of her husband lay in a white coffin.

“Thoughts were running in my mind. ‘It can’t be you. You don’t deserve this. There are others who deserve this more than you,’” she said in a separate interview with Reuters.

“If only I had wings, I would quickly fly to his side,” she said.

Photographers surrounded her behind a police cordon as she cuddled her husband’s body. A piece of cardboard was left next to his body with the words “drug pusher” written on it.

The next day, the Inquirer published a front-page photo of a weeping Olayres cradling the body of Siaron, a heartbreaking image that went viral on the internet, sounding a global alarm over human rights violations in the Philippines.

But that picture failed to touch Mr. Duterte. He mentioned it in his inaugural State of the Nation Address to Congress on July 25, calling it melodramatic and seeking to evoke “Pieta,” the 1499 sculpture of Michelangelo depicting a heart-rending scene from the Deposition of Jesus.

“You are portrayed in a broadsheet like [the Virgin] Mary cradling the [body] of Jesus Christ. Let’s do drama here,” Mr. Duterte said in his speech in response to the public outrage inspired by the photo.

Church groups, rights advocates and some sections of the media have criticized Mr. Duterte’s war on drugs and expressed alarm at what they have termed extrajudicial killings.

More than 500 people, mostly poor drug users, have been killed since Mr. Duterte was elected.

As of July 30, the statistics stood at 525 killed: 170 in vigilante attacks and 355 during police operations.

In his maiden policy speech, Mr. Duterte declared there would be no letup in the campaign, ordering police and local officials to “double your efforts, triple them if need be.”

“We will not stop until the last drug lord, the last financier and the last pusher have surrendered or put behind bars or below the ground if they so wish,” he said.

He vowed to show “no mercy,” warning criminals that priests and human rights advocates cannot protect them from death.

Such words from the tough-talking former mayor of Davao City draw cheers from his supporters, hurting Olayres, who lamented that some people were unperturbed by the killings.

“They’re happy because it hasn’t happened to them. What if they lose a loved one, someone who is not guilty of the offense?” Olayres said in the interview with the Inquirer. “It’s difficult to accept.”

“President Duterte hates pushers. I hope he himself will investigate the killings of people who have been judged with a cardboard,” she said, referring to the cardboard signs that read “drug pusher” left by the killers beside the bodies of their victims.

In the war on drugs, “they should go to the root,” she said, adding that her blood boiled after she saw the Inquirer photo in a blog that branded it as fake.

“I hope they think first before they judge. That kind of situation when you see someone you love slumped on the road, are you going to think of drama?” she said.

“I am not expecting justice for my husband. I know we won’t get that, especially since people believe the cardboards—cardboards that can never prove if the slain person is really a pusher. I just want to clear my husband’s name,” she said. Reports from the wires and Erika Sauler