THE FORMER director of the Philippine Drug Enforcement Agency (PDEA) on Sunday came to the defense of Chief Supt. Edgardo Tinio, the former chief of the Quezon City Police District (QCPD), who was accused by President Duterte of coddling illegal drug syndicates.

Dionisio Santiago, who also served as Armed Forces chief of staff, said he himself conducted a background check on Tinio after the President said that he and four other retired and active senior police officials were involved in the illegal drug trade.

A seasoned Army intelligence officer, Santiago said he did not come across Tinio’s name when he headed PDEA, the country’s primary antinarcotics agency, during the Arroyo administration.

According to him, he personally interviewed several individuals, including incumbent PDEA officials and Tinio’s “mistahs” (classmates) at the Philippine Military Academy (Class 1985), who all vouched for his integrity.

“I did a countercheck on him (Tinio) and it looks like he’s clean. They said he’s straight and has no involvement in illegal drugs,” Santiago told the Inquirer.

Tinio, however, admitted that he used to accept grease money from jueteng operations when he was assigned in Central Luzon, Santiago said. 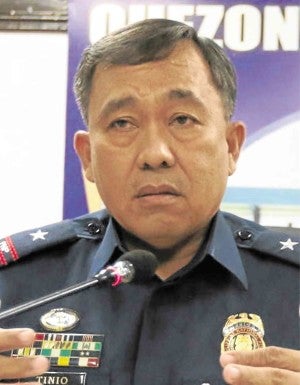 He added that a certain Agcaoili, Tinio’s subordinate, had delivered protection money to Tinio purportedly coming from jueteng operators in Pampanga province.

“Maybe Agcaoili told him that the payola came only from jueteng, but he was unaware that drug money was also being delivered to him,” Santiago said.

While he respected the President’s decision to name Tinio and the four other officials, he surmised that those who provided Mr. Duterte with the information were “pressured” to identify high-ranking Philippine National Police officials allegedly protecting drug lords.

“I’m sure the President has information which we do not know [about]. He’s a good operator,” Santiago said. “But those tasked to produce the names of police officials should not let politics or other motives get in the way of their work because lives are at stake here,” he added.

Santiago, whom the President supported in his failed bid for a Senate seat in the May 9 elections, said that Tinio had sought an audience with him.

“That’s why I conducted my own background check on (Tinio) because I did not want to talk to him if he was indeed into illegal drugs,” Santiago said.