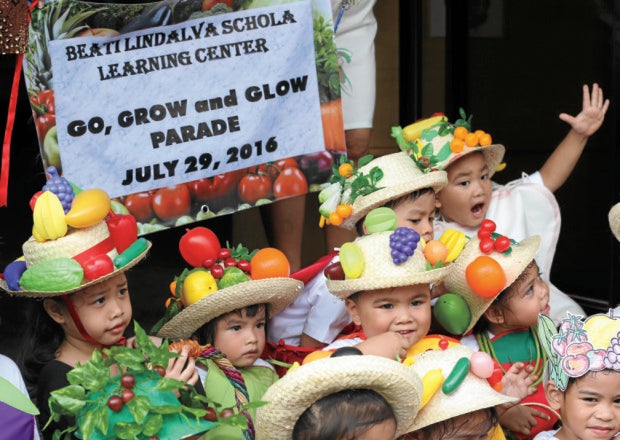 EAT RIGHT to be bright.

To mark the end of Nutrition Month, stories on the importance of healthy eating habits and taking care of one’s body were the focus of Saturday morning’s Inquirer Read-Along session held at the newspaper’s main office in Makati.

The session featured as readers chef Angelo Van Toorn, head baker at the Academy of Pastry and Bakery Arts Philippines, and Ann Abacan, principal of Sophia School in Meycauayan, Bulacan.

Abacan kicked off the session with the story “I Don’t Like to Eat” by Excel Dyquiangco and Marcus Nada, which is about how a young boy learned the value of eating healthy food.

A first-time storyteller, Van Toorn read “Hayan na si Kidlat,” a story about Biboy, a young boy who was as fast as lightning but who later found out that he had a weakness. Written by Russell Molina and illustrated by Ariel Santillan, the story teaches kids the importance of not skipping meals, especially breakfast, which is the first meal of the day.

Inquirer mascot Guyito capped the session with a dance number, regaling the more than 50 kids in the audience. The entire session was streamed on Facebook Live—a first for the Read-Along program.

For Van Toorn, reading plays a big part in becoming a better baker or pastry chef. In fact, he tells his students at the academy to read the book if there is something they do not get right in the kitchen.

“What I saw in the children is they are very bright, very happy, very energetic. They wanted to get involved in the story. I already knew that Filipinos were very bright and open people but you really see it in the children,” said Van Toorn, who started his career as a culinary chef before moving on to become a baker and pastry chef. He said he fell in love with the science and history behind baking bread.

Van Toorn grew up in the United States, but has been living in Malaysia for two years. He comes to the Philippines every two months to teach bread-making classes at the academy, saying that he loves teaching here because he finds the students and the people very bright and happy, and this was the same sentiment he felt after reading to the kids.

The Academy of Pastry and Bakery Arts offers programs that focus on modern and French techniques and is the only school specializing in pastry and baking, where world champion chefs mentor students in three-month, six-month and nine-month courses. It is marking its first anniversary in the Philippines on Aug. 5. Its flagship school is in Malaysia and it also has a school in India.

11-year-old John Ernie, from F. Ma. Guerrero Elementary School, particularly liked Abacan’s story. “I learned that we should always eat healthy food and not be fond of junk food. Vegetables will help us live a longer life,” he said.

“We should not forget to eat breakfast so we will have energy for the whole day,” she said.

Hannah from San Joaquin Elementary School enjoyed the session because she “likes to eat a lot.”

Fay Omar, a teacher at F. Guerrero, said the program’s timing was perfect as it tied up with Nutrition Month in July, adding that it encouraged children to be more aware of the food they eat. “It’s important that they also know that not all the food they want to eat—not even their favorites—are good for them,” she said.

Omar’s co-teacher Rumen M. Montemayor said the storytelling program was very helpful to teachers. “We can now tell our students, ‘Hey, storytelling isn’t as boring as just reading a book, you can actually put more life into it.’”

“I’d like to bring our co-teachers to the Read-Along someday. We’d like to share with them how storytelling can be used to teach values, lessons and messages, especially for younger kids,” Montemayor added.

For Alma Lawagan of A. Regidor Elementary School, Read-Along motivates children to drop their phones, tablets and handheld games and pick up a good book. “Programs like this can also help create good relationships between parent and child,” she said.

For parent Lea Domingo, one of the best things a mother can do is to be the perfect role model for her child. “I eat nutritious food, so my kids would emulate me. After all, what else would they eat but the food I prepare for them as their mom?”

The kids were treated to lunch and pastries courtesy of the Academy after the session. Prizes for the question-and-answer portions were courtesy of Alma Lawagan of A. Regidor Elementary School. Saturday’s session, hosted by Inquirer researcher Rafael Antonio, was in cooperation with Kim Beckley of the Academy of Pastry and Bakery Arts. With reports from Ana Roa, Inquirer Research, and Pam Ramirez and Cyd Cruz