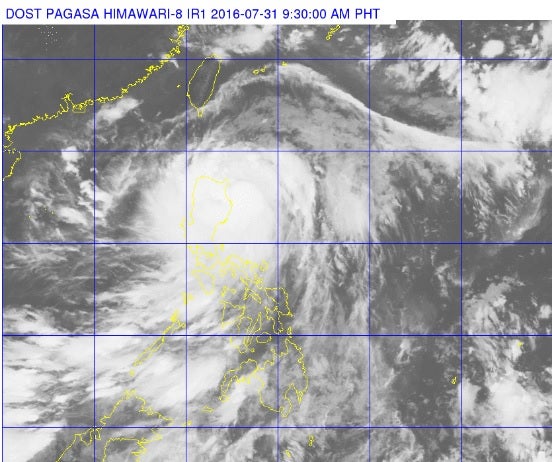 This photo posted on Pagasa’s webpage at 9:30 a.m., July 31, 2016, shows the clouds of Tropical Storm Carina blanketing Luzon. The eye of Carina was forecast to make landfall in Cagayan on Sunday evening. PAGASA PHOTO

TROPICAL Depression “Carina” intensified into a tropical storm Saturday, bringing rain over a large area and stranding nearly 3,000 passengers at ports east of the capital, the weather bureau said.

In its 5 p.m. update, the Philippine Atmospheric, Geophysical and Astronomical Services Administration (Pagasa) said Carina was tracking northwest with winds of 65 kilometers per hour near the center and gustiness of up to 80 kph.

It is expected to move north-northwest at 18 kph and make landfall in Cagayan province Sunday evening. It will exit the country’s area of responsibility by Monday afternoon, Pagasa administrator Vicente Malano said.

“The estimated rainfall amount is from moderate to heavy within the 400-km diameter of the tropical storm,” Pagasa said, warning fishermen of “rough to very rough seas” over the eastern seaboard.

The second of a four-step storm signal has been hoisted over Isabela province, meaning winds of 61 to 120 kph are expected in the area in 24 hours, forecaster Adzar Aurelio said in a news briefing.

It said areas covered by the storm signals, as well as Cagayan Valley, Cordillera, Masbate, Camarines Norte and Quezon should brace for moderate to heavy rains that could trigger flash floods and landslides.

The Philippine Coast Guard meanwhile has placed its stations and rescue teams on standby, with 2,769 passengers stranded in different ports in Bicol and Eastern Visayas. Jaymee T. Gamil and |Julie M. Aurelio