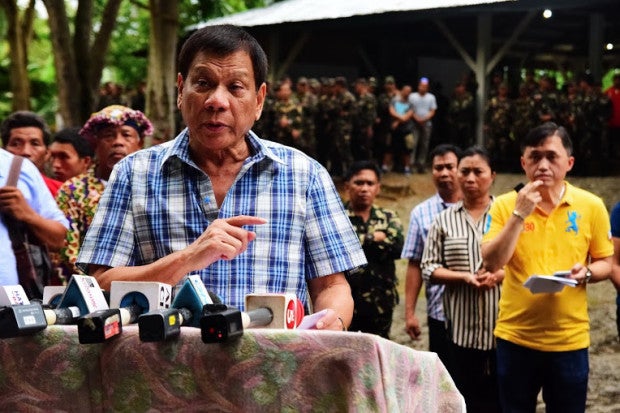 President Rodrigo R. Duterte announces during his visit to Camp Morgia in Doña Andrea, Asuncion, Davao del Norte on July 29 that the Communist Party of the Philippines (CPP) is being given a deadline until 5:00 p.m. of July 30 to reciprocate a ceasefire from their side. Otherwise the President will lift the unilateral ceasefire he declared for the communist rebels during his first State of the Nation Address (SONA) on July 25. RENE LUMAWAG/PPD

President Rodrigo Duterte on Saturday night recalled his ceasefire order after a 5 p.m. deadline he had set passed without a response from communist insurgents.

But Jose Maria Sison, founding chair of the Communist Party of the Philippines (CPP), said that although refusing to be bullied, the insurgents had planned to declare a truce at 8 p.m.

“But since Duterte had already lifted his ceasefire order, then there’s nothing we can do,” Sison told ABS-CBN News Channel, speaking from Utrecht, the Netherlands, where he is living in self-imposed exile.

The ceasefire, which Mr. Duterte declared during his inaugural State of the Nation Address to Congress on Monday, lasted less than a week.

“Let me announce that I am hereby ordering the immediate lifting of the unilateral ceasefire that I ordered last July 25 against the communist rebels,” the President said in a statement.

Mr. Duterte also ordered the military and the police “to withdraw the operation guidelines they had issued” after his truce declaration.

He directed government forces to be on alert for threats to national security.

“I am ordering all security forces to be on high alert and continue to discharge their normal functions and mandate to neutralize all threats to national security, protect the citizenry, enforce the laws and maintain peace in the land,” the President said.

Mr. Duterte had made friendly overtures to the insurgents, then issued the ceasefire order to encourage peace talks.

Two days after his announcement, however, communist New People’s Army (NPA) guerrillas ambushed militiamen returning to their base in Kapalong, Davao del Norte province, killing one and wounding four others, angering Mr. Duterte, who threatened to scuttle his ceasefire order unless the rebels showed their readiness to match his truce declaration.

Mr. Duterte initially threatened to recall his ceasefire order by Friday but extended his deadline after the rebels said they were investigating the guerrilla attack.

On Friday, the President gave the rebels an ultimatum, saying he would scuttle his ceasefire order if they would not declare their own truce by 5 p.m. the next day.

The deadline passed on Saturday with no indication the rebels would declare a truce.

In his television interview, Sison criticized Mr. Duterte for giving the insurgents an ultimatum.

Calling the President a “bully,” he said Mr. Duterte could never tell the revolutionary movement to do whatever he wanted.

“He is so thuggish, he immediately wants a fight. If he doesn’t want peace, so be it,” Sison said.

He said the ceasefire order from the CPP was a public notice from the information department of the party’s central committee, and was recommended by the National Democratic Front of the Philippines, the political arm of the local communist movement.

“Four hours ago, there was an announcement of a ceasefire order from the revolutionary movement at 8 p.m. It was they who would decide whether to release or hold it,” he said.

Sison said he was not in a position to order the insurgents to declare a truce.

Even the military was not enforcing Mr. Duterte’s ceasefire order, he said.

“He should not give us an ultimatum. We asked for only a little time. What we are trying to resolve here is a real war that has lasted for decades,” he said.

Earlier Saturday, a spokesperson for the NPA Southern Mindanao Regional Operations Command said the military, militiamen and the police showed no signs they were observing a ceasefire even after President Duterte had declared a truce.

“The NPA and the people’s militia are ready to defend [themselves against] enemy troops who are actively present in almost all villages in Southern Mindanao,” Rigoberto Sanchez, the rebel spokesperson, said.

“These are not troops implementing innocuous ‘civil-military operations’ but are implementing combat operations, surveillance, reconnaissance, intelligence and psychological warfare in civilian communities,” he said.

Earlier, the NPA admitted the attack on militiamen in Kapalong, but said it was a counteroffensive.

On Saturday, Sanchez said the firefight in Kapalong was proof of continuing government operations against the NPA.

He said military officials opposed to peace were spinning lies to derail the peace negotiations.

Sanchez said it would be difficult for the NPA to reciprocate Mr. Duterte’s ceasefire declaration if there were military officials who refused to follow the President’s order.

In his television interview, Sison said he remained open to peace talks with the government.

“As far as I’m concerned, what has been decided—that the two sides will meet for talks—is still on,” he said.

Presidential Adviser on the Peace Process Jesus Dureza said Saturday night that peace talks with the insurgents would continue even with the lifting of the truce order.

Speaking on state-run Radyo ng Bayan, Dureza said there was no “intervening factor” that would affect the resumption of peace negotiations.

Earlier yesterday, Dureza said peace talks with the insurgents would proceed even if President Duterte scuttled his ceasefire order.

“We’re pushing through with it as originally scheduled,” he said.

He said the talks, to be held from Aug. 20 to 27 in Oslo, Norway, had been set before Mr. Duterte declared a ceasefire during his inaugural address to Congress last Monday.

“[The lifting of the ceasefire order] will not in any way affect the peace talks because we know, even when we agreed to resume peace negotiations, we have tabled as an agenda item the discussion on the current ceasefire. At that time, we did not even consider that a unilateral ceasefire would be called by the President,” he said.

“So it is not a factor at all in the planned negotiations,” he added.

A bilateral ceasefire could be discussed during the peace talks, he said.

“We can fine-tune the ceasefire arrangement there because when you come up with a bilateral negotiated ceasefire, the mechanisms and the other collateral arrangements will be discussed across the table during that particular time,” he said.

As for the statement of Sison asking the President for more time to study a ceasefire, Dureza said he respected the statement.

But Sison should also respect the position that Mr. Duterte had taken, he said.

He said that the President declared a unilateral ceasefire to bring peace, protect communities, and provide an enabling environment for peace negotiations.

But the President, he said, had also expected the communist groups to reciprocate with their own truce declaration. With reports from Yuji Vincent Gonzales, Inquirer.net; and Karlos Manlupig, Inquirer Mindanao/TVJ

Joma Sison: Duterte can be ‘volatile’ but…