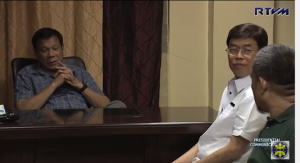 President Rodrigo Duterte grants suspected drug lord Peter Lim an audience on July 15, 2016. Lim, a long-time businessman in Cebu, wanted to clear his name after Duterte himself named him as one of the three biggest drug traffickers in the country. Duterte told Lim to subject himself to an investigation. (SCREENSHOT OF RTVM VIDEO)

This is the challenge hurled by the lawyer of Cebuano businessman Peter Lim to the head of the Philippine Drug Enforcement Agency (PDEA) who has claimed that his client is the same Peter Lim who has been involved in the illegal drugs trade all these years.

“Let them prove it. It’s not our obligation to prove the innocence of my client because the Constitution says anyone is presumed innocent until proven guilty,” said lawyer Pedro Leslie Salva.

He wondered why PDEA Director General Isidro Lapeña implicated his client only now.

“Where was he (Lapeña) during the time of Pnoy (President Benigno Aquino III)? Why didn’t he mention  it?” he said.

Salva pointed out even President Duterte admitted that there was no evidence linking Lim to the illegal drugs trade.

“That’s more than enough to prove what I’m talking about, and I don’t think the President is irresponsible enough to make such statement,” he said.

In an interview over  ABS-CBN’s late evening newscast Bandila on Thursday, Lapeña said the businessman was on their target list.

Lapeña said they could not arrest Lim since no court has issued a warrant of arrest against the businessman, yet.

Yogi Filemon Ruiz, PDEA director for Central Visayas, said he had heard about Lim’s alleged involvement in illegal drugs trade since the early 2000s when the businessman and his brother Wellington were subjects of a congressional inquiry after their names had been on top of the police watch list of drug personalities in the country.

“I’m not new to my job and this is not the first time I heard about him (Cebu’s Peter Lim),” he said.

When he assumed his post as PDEA-7 director on Thursday, Ruiz showed reporters a folder containing the top drug personalities in Cebu and other parts of Central Visayas.

Its contents were kept confidential.

But Ruiz said Lim’s name was not among those PDEA-7 has been pursuing.

“What I have are the names of the ‘new’ top drug personalities in the cities and provinces in Central Visayas as product of intelligence works by PDEA, the police, and the National Bureau of Investigation,” he said.

Ruiz said Lapeña named Lim because the businessman had long been dragged into the illegal drugs trade.

“Whatever data our director has is also what I got,” he said.

Ruiz said he was just waiting for any directive from Lapeña to assist in investigating Lim.

“There’s an ongoing investigation against Lim before the NBI and I don’t want to meddle in that because it might be construed as ‘pasikat’ (grandstanding). And if I conduct an investigation, it might be redundant with what NBI is doing. What if the outcomes of the two investigations are different?,” he said.

Lim appeared before the NBI in Manila last July 21 after President  Duterte advised him to subject himself to a probe to clear his name amid insinuations that he was one of the three big-time drug lords in the country.

He said his family has been put in danger because of all the wrongful allegations.

Lim, 69, was the same person that the House of Representatives committee on dangerous drugs investigated in 2001 for the same allegations.

But the committee found no sufficient evidence to prove the accusations.

The NBI recently formed a special task force that would focus on Lim’s case.

Joel Tovera, head of the Bureau’s Anti-Illegal Drugs Division, is on top of the investigation.  SFM

Read Next
Quiapo road rage suspect presented to media; case dubbed ‘solved’
EDITORS' PICK
Geek out at TOYCON 2022 powered by Smart Signature
Unemployment rate up to 6% in May
Bye bye Boris: UK PM Johnson bows out with regrets but no apologies
House energy committee chair Arroyo bats for cheap electricity
High inflation: Your P1 is now worth only 87 centavos
High-risk pregnancy: Reducing your risk is in your hands
MOST READ
Suspect in grisly killing of missing woman in Bulacan arrested
Kim Atienza’s daughter flaunts bikini body in response to critics of her ‘revealing photos’
Bongbong Marcos’ first order: Abolish PACC, Office of Cabinet Secretary
Ex-Defense chief Lorenzana is the new BCDA chair
Don't miss out on the latest news and information.