3 shot dead near Tacloban airport; cardboard links them to drugs 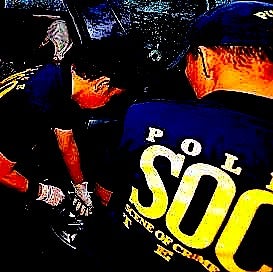 TACLOBAN CITY — A man and two women were killed on Friday morning near the Tacloban City airport where Pope Francis held his historic Mass in 2015.

The killing was said to be drug-related although police investigators were not confirming it as of press time.

Jason Boclatan was identified by  his common-law-wife Christine Jackson, who was informed about his murder by a neighbor. His two companions remained unidentified, as of this posting.

Found on the lifeless body of Boclatan was a white cardboard with a handwritten note that read:  “Drug pusher ako. Lord patawad.” (I am a drug pusher. Forgive me, Lord)

Jackson, 31 and a mother to a two-year-old girl, denied that that her common-law-husband was engaged in illegal drug activity.

“But he is (a police) asset. He was part of an earlier operation which resulted in the arrest of a known drug lord in Ormoc,” Jackson said.

“Maybe he was killed by someone who knew him,” she added.

She said she last saw Boclatan alive on Thursday night.

“He told me that he would go to a friend who owed him some money. But he never returned,” said Jackson.

The three were found dead inside a black Toyota sedan at the proposed new tarmac of the Daniel Z. Romualdez (DZR) Airport where Pope Francis held a Mass during his visit to Tacloban on January 17, 2015.

“We are still conducting our investigation on the matter,” he said.

Initial police investigation showed that residents in the area heard at least 10 gunshots around 3 a.m. to 4 a.m. followed by a sound of a motorcycle driving away.

Recovered from the crime scene were 14 empty shells and two slugs of a .45-pistol.  SFM/rga