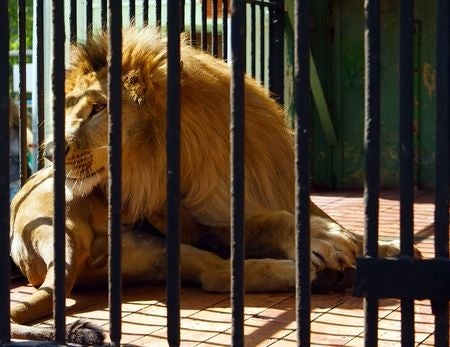 When a nation undergoes a financial crisis, humans aren’t the only ones who suffer.

About 50 animals in Venezuela’s Caricuao Zoo have starved to death in the last six months due to chronic food shortages caused by the country’s economic downturn, a Telegraph report said.

The long list of confirmed fatalities includes Vietnamese pigs, tapirs, rabbits and birds, some of which had not eaten for two weeks.

To make up for the food scarcity, carnivorous felines like lions and tigers are being fed mango and pumpkin by anxious zoo personel, while an elephant is eating tropical fruit instead of its usual diet of hay.

“The story of the animals at Caricuao is a metaphor for Venezuelan suffering,” Marlene Sifontes, union leader for the National Parks Institute (INPARQUES) employees, said in the report.

Meanwhile, local administrators of a park in the western state of Tachira,  La Laguna, are  actively seeking donations from local businesses to feed their animals.

“We are doing all that is humanly possible to ensure the zoo continues to function,” said Oslander Montoya, an accountant for the local municipality that handles funding for the zoo.

Three animals died in May at a zoo in Paraguana in the northwestern Falcon peninsula, Montoya also confirmed.

The plight of the animals parallel the crisis facing most Venezuelans who are now routinely skipping meals or waiting hours in lines for the dwindling food supplies in supermarkets.

The INPARQUES, which oversees the country’s zoos, attributes the shortages on the country’s economic crash caused by a plummet in the price of oil, which is Venezuela’s primary export.

As a result, the Venezuelans cannot afford to import food, medicine and other necessities, and inflation has caused prices to skyrocket.

The situation has gone so dire that some locals have began hunting dogs, cats and pigeons for food. On Monday (Tuesday in Manila), some of Caracas zoo’s visitors even resorted to stealing horse and butchered it for meat.

The International Fund for Animal Welfare (IFAW) has also taken notice of the country’s unfortunate situation and aired its grievances in a report in the Independent.

“It all comes down to organizational management,” IFAW’s wildlife rescue manager Gail A’Brunzo said of the country’s tough predicament.

“If the zoo is in imminent financial crisis, they need to take steps to provide for these animals. Ailing zoos should reach out to partner zoos or organizations that might be able to help,” she added. “This does not appear to be a short-term thing.”  Khristian Ibarrola