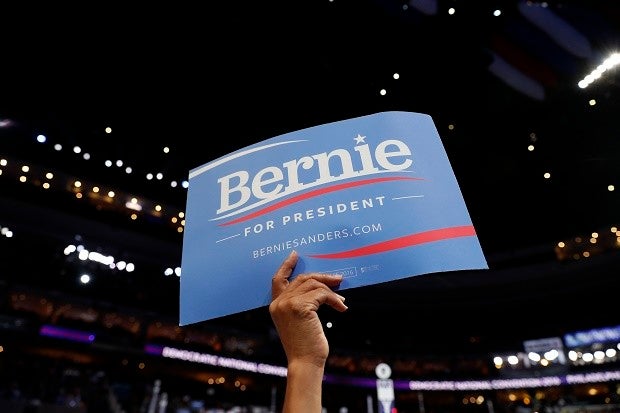 In this July 25, 2016, photo, a supporter for former Democratic Presidential candidate, Sen. Bernie Sanders, I-Vt., holds up a sign during the first day of the Democratic National Convention in Philadelphia. As Democrats rally around Hillary Clinton, the lingering “Bernie or Bust” movement is stirring frustration at the Democratic convention among delegates of color, who say they’re upset at the refusal of the Vermont senator’s most fervent backers to fall in line behind the party’s nominee. AP

PHILADELPHIA — As most Democrats rally around Hillary Clinton, the lingering “Bernie or Bust” movement is stirring frustration at the party’s convention among delegates of color, who say they’re upset at the refusal of the Vermont senator’s most fervent backers to fall in line.

“I am so exhausted by it,” said Danielle Adams, a black Clinton delegate from North Carolina. “I think there are undercurrents of privilege that concern me.”

Adams is among those who say the “Never Hillary” crowd, a group that is largely younger and white, isn’t considering the struggles black Americans still face every day. And, they argue, how the nation’s ethnic and racial minorities may be affected by a Donald Trump presidency.

Rep. Cheryl Brown, a California delegate from San Bernardino who is black, condemned what she called the “aggressive” behavior of some Sanders delegates, saying they jumped on tables and shoved people at the state’s hotel the night that Sanders moved that the convention nominate Clinton by acclamation.

“I think here at the convention, it’s been exacerbated by the way they are treating people,” she said. “I haven’t had that happen with any of the African-American Bernie supporters.”

Maryland Rep. Elijah Cummings, an African-American and close ally of Clinton, was telling the story of his late father — a share-cropper in South Carolina — on the convention’s first day when Sanders supporters started chanting “No TPP” and holding up signs opposing the trade pact.

“It was downright disrespectful,” said Kweisi Mfume, a Clinton delegate and former head of the NAACP, who called it a “a low point” of the four-day summer meeting. “I think it does not necessarily help the relations that Bernie’s people may have with the larger African-American community.”

To be sure, many black delegates at the convention said they don’t view the “Bernie or Bust” movement through a racial lens. Count Cummings among them. He said that as a veteran of many civil rights protests, he understands the passions that drove the mostly young delegates to shout over his speech.

“The optics were not pretty, but I couldn’t be upset with them. Two or three years ago, they would have been outside politics,” he said, adding that more than 100 people have since apologized for the outbursts. “I am so glad these people are under our tent.”

Others, meanwhile, are frustrated by Sanders backers who contend the nomination was stolen from the Vermont senator. They say those delegates are ignoring the fact Sanders lost the nomination to Clinton, in part, because he didn’t appeal strongly enough to African-American voters.

“They haven’t considered the perspective of minorities,” said Kenneth Williams, a black Clinton delegate from Texas. “I don’t think there was enough there to bridge to that community.”

Clinton undoubtedly has far more appeal than Sanders among black voters, a critical voting bloc in Democratic primaries. The former secretary of state won more than three out of four black votes in 25 primary states where exit polling was conducted and, by the end of the primary season, she had swept the 15 states with the largest black populations.

“At the end of the day, (Sanders’) coalition looked too much like a modern day Woodstock, and not enough like the Obama coalition it takes to win the primaries and the general,” said Boyd Brown, a Democratic National Committeeman from South Carolina who supported former Maryland Gov. Martin O’Malley.

Michelle Bryant, a radio talk host in Milwaukee who is attending the convention, said she’s heard similar concerns from some people who call in to her show. She said Clinton has a decades-long history of fighting for racial and economic justice that some Sanders supporters seem willing to dismiss — even as they promote Sanders’ civil rights advocacy.

“You wouldn’t have expected this stuff to kind of break out along racial lines,” Bryant said.

But those complaining about Sanders supporters and expressing fears of Clinton losing to Trump are missing the point, said Natalie Vowell, a white Sanders delegate from Missouri. Clinton, she said, just hasn’t been a positive for black Americans.

“There have been more young black men imprisoned, more brown bodies piling up across the globe, and I’m not sure at this point that a warmonger like Hillary Clinton is any better than a tyrant like Trump,” said Vowell. She said she’s not yet sure if she will vote at all in November.

Ohio state Rep. Alicia Reece, president of the Ohio Legislative Black Caucus and a Clinton delegate, said she heard some complaints when a few people booed Michelle Obama when she mentioned Clinton’s name Monday night. But she predicted the party would ultimately come together.

“Both groups have strong feelings about what’s going on,” she said. “Even non-African-Americans are afraid of Donald Trump, not just pro-Hillary people. They know we’ve got to unite and stop Trump.”