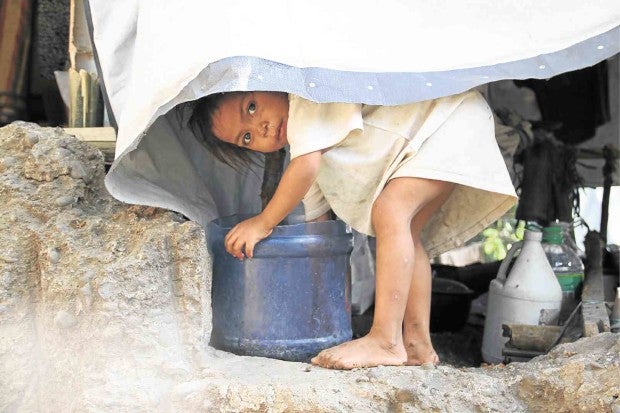 LIFE in a shelter is tough for this “lumad” child, who plays with a water container at the Haran compound of United Church of Christ in the Philippines in Davao City where she and hundreds of other lumad sought refuge after fleeing heavy military presence in their community. DENNIS JAY SANTOS/INQUIRER MINDANAO

DAVAO CITY—Thousands of lumad, who fled their homes in 2015, are now preparing to return to their communities after President Duterte gave an assurance that it is now safe for them to do so, a lumad leader said.

Kerlan Fanagel, chair of the Pasaka Lumad Confederation, said Duterte also vowed continued help for the lumad through the Department of Social Welfare and Development (DSWD).

Fanagel said the DSWD is now processing his group’s request for relief and rehabilitation. “(Mr.) Duterte said there is an existing budget for this,” he said.

Fanagel is among lumad leaders who met with Mr. Duterte on Monday after the President’s State of the Nation Address.

He said Mr. Duterte had told them they can now return to their communities without fear.

Some 3,000 lumad have been staying in evacuation centers in Tandag City in Surigao del Sur province, following the September 2015 killings of lumad leaders in Lianga town.

At least 350 are staying at the United Church of Christ of the Philippines’ Haran Center here due to heavy military presence in their communities in Davao del Norte and Bukidnon provinces.

Fanagel said abuses by soldiers were among the concerns of indigenous peoples.

“The President told us to trust him. Our people, he said, can now return to their villages,” he said.

Fanagel said banking on Duterte’s assurance, evacuees in Tandag and Haran are now preparing to return to their communities.

“We trust his statements and promises,” he said.

Fanagel said his group understood that there would be no total pullout of soldiers from lumad areas yet but Mr. Duterte pledged to gradually reduce troop numbers as his administration prepares to talk peace with communist guerrillas.

“But he said there is nothing to worry about because we are not the targets anymore,” he said.

Capt. Rhyan Batchar, spokesperson of the Army’s 10th Infantry Division, which has jurisdiction over several Mindanao areas, said lumad returning to their communities, including those facing arrests, have nothing to worry about as they would not be harassed by soldiers.

“Our President already issued the order and we will abide by it,” Batchar said on Wednesday.

Lumad leaders covered by arrest warrants, said Batchar, also need not worry because the court that issued the warrants has already issued a temporary restraining order against the serving of the warrants.

“It is an adequate assurance that they can already go home,” said Batchar. Karlos Manlupig, Inquirer Mindanao