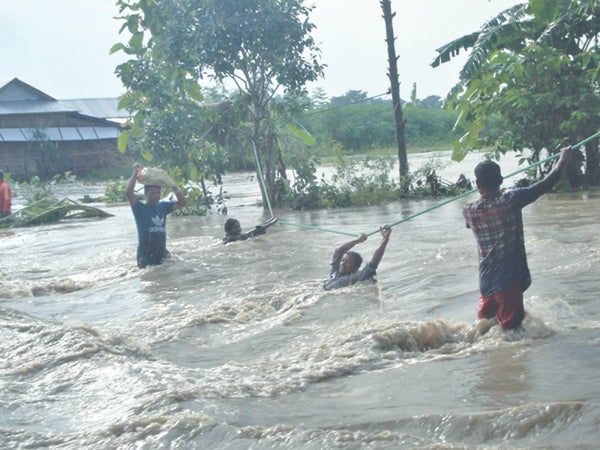 Locals struggle to cross a flooded river as they try to carry relief materials for flood victims of Jayanagar of Hasandaha and Amardaha of Suga Bazaar in Morang district on Wednesday. KATHMANDU POST/ANN

Death toll from flooding and landslides across the country continued to rise on Wednesday, as government authorities scrambled to put in place a disaster management system.

At least 77 people have been reported dead in floods and landslides since Monday. Nine persons are still missing. However, the Ministry of Home Affairs has put the death toll from the water-induced disasters at 57.

With monsoon in full swing, torrential rains in many parts of the country have caused floods and landslides, putting thousands of lives at risk.

Pyuthan district has been hit the hardest. Death toll from separate incidents of flooding and landslide in the mid-western district on Wednesday rose to 36. CPN (Maoist Centre) central member Hari Bahadur KC was among the dead.

Six others are still missing. At least six VDCs in the district have been hugely affected. Inspector Nir Bohara, who was leading a relief and rescue operation, said at least 24 people were killed in Phopli alone.

“The rescuers plucked the bodies from the debris and handed them over to their families,” he added. The bereaved families, however, have not been able to perform the final rites, as the authorities are yet to carry out post-mortem. Doctors have not reached the area yet. Around 200 families have been displaced due to floods and landslides.

In Baglung, two more bodies were recovered on Wednesday. With this, the death toll in the district has reached six. Floods have also swept away four micro-hydropower projects and damaged some bridges, according to police.

Our local correspondent from Rolpa reported that four members of a family were buried to death in a landslide at Uwa VDC-9.

In Jhapa, three persons were swept away by the rain-swollen Geuriya stream. Two persons from Topgachhi and one from Garamani died in the incident, said police. Three other people are still missing in flooding in the district.

In Dang, a missing person from Gangaparaspur-9 was found dead on the bank of Rapti River on Wednesday. Similarly, three persons were killed in Arghakhanchi, while one each died in Parbat and Kapilvastu in floods and landslides.

More than 600 flood victims who were stranded since Monday night due to flooding in Rapti river in Chaupheri village in Banke were rescued on Wednesday.

A Nepal Army chopper rescued them to safer locations in Holiya VDC. Maharaja Ahir of Chaupheri, one of the rescued, said his village has been completely submerged. According to police, hundreds of people from Devpura, Piprahawa, Shantipur, Bhawaniyapur, Gedawa and Bharta among other villages in the districts have been displaced by flooding.

Water levels rising in Narayani, receding in Koshi CHITWAN: Water levels in Narayani River crossed the danger mark on Wednesday. Residents living in the surrounding areas have moved to higher grounds. All the floodgates of the Gandak Barrage in Triveni have been opened.

Police said 34 houses have been inundated in Susta, Triveni. Nepal Army personnel have been mobilised in the flood-affected areas. However, water levels have decreasing in Koshi River. Water flow in the river was measured at 235,510 cusec on Wednesday evening. TVJ