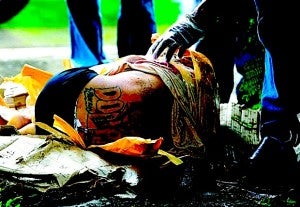 SUBIC, Zambales — The body of an unidentified man, believed to be a victim of summary execution, was found in a grassy portion near a beach resort here on Wednesday (July 27), police said.
The man was discovered by village officials at 9 a.m. in Barangay (village) Cawag, said Chief Insp. Leonardo Madrid, commander of Subic police station, in a report.

Madrid said black cloth was coiled around the victim’s face and neck.

Set beside the remains was a placard with the message, “Tulak ako, huwag tularan, boss ko si kidlat ng Subic, Zambales (I’m a drug pusher, don’t act like me, my boss is kidlat of Subic, Zambales).”

The body bore two gunshot wounds in the chest and another bullet wound at the neck.

Police said the victim was also stabbed 11 times in the back.  SFM