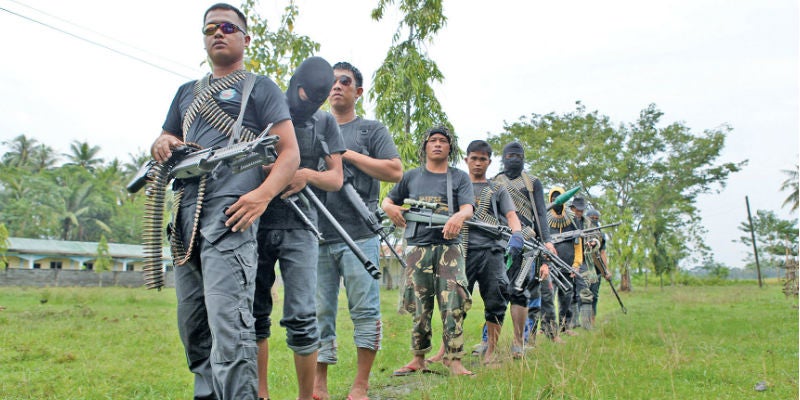 Members of the breakaway Bangsamoro Islamic Freedom Fighters (BIFF). Latest reports claim that a faction has broken away from the current BIFF leadership.  INQUIRER FILE PHOTO

CAMP SIONGCO, Maguindanao – Six gunmen of a breakaway faction of the Bangsamoro Islamic Freedom Fighters and a soldier were killed in a series of clashes in Maguindanao on Tuesday, the Army said.
Four soldiers and 10 breakaway BIFF men were also injured in the fighting that erupted at 4:30 a.m. in Barangay Pamalian in Shariff Saydona town, according Col. Lito Sobejana.

Sobejana, the commander of the Army’s 601st Infantry Brigade, said fighting continued until noon. He confirmed that the military used two MG-520 attack helicopters in support of ground troops and to retrieve wounded soldiers.

Sobejana said the BIFF forces involved in the clashes were under Kagi Karialan, who had proclaimed himself as the new BIFF leader. Karialan earlier ousted Commander Bungos, a trusted lieutenant of BIFF founder Ameril Umra Kato, who had died a few months back, as BIFF chair.

“It would be best that they surrender so that there will be no more bloodshed,” Pangilinan said in a statement.

Both Sobejana and Pangilinan said the remains of the slain BIFF gunmen had been retrieved and had been turned over to local officials so that their relatives can claim them.