When Punisher and Fiscalizer meet

THE WARMTH of their handshake quickly melted the ice between The Punisher and The Fiscalizer.

In one of the standout sidelights at Monday’s historic affair, President Duterte extended his hand to Sen. Leila de Lima as he walked toward the stage for his first State of the Nation Address (Sona).

It was an “unexpected” gesture between two officials who have, on many occasions, crossed swords on human rights issues.

Speaking to reporters on Tuesday, De Lima recalled the moment in detail, as if replaying the rare encounter in slow motion.

She said it was only her third time to see Duterte, aka The Punisher, face to face even as they often had tense exchanges in the media.

“Of course, I was surprised,” the senator said. “When (Duterte) arrived, he was walking toward me (but) I really did not notice him looking. He just glanced (my way). I didn’t even know how to show my face, so I just smiled a little,” De Lima said.

The senator was the only official on the front row whom President Duterte approached on his way to the rostrum at the Congress session hall, before he delivered his hour-and-a-half speech.

The President passed her by, De Lima said, “but he came back and extended his hand. Of course I was surprised, so I shook his hand. He didn’t say anything. He just looked at me straight in the eye and with a little smile, and so I smiled (back).  And I could only say ‘Hi, sir.’”

After that brief  encounter, Duterte continued on his way casually, before briefly turning his head to look back at the senator. Then he made a face, an expression caught on camera.

“It was a childish smirk,” De Lima said. “It’s just him being naughty. As our fellow Bedans have said, he’s (always) been like that,” said the lawmaker, Mr. Duterte’s junior at the San Beda law school. 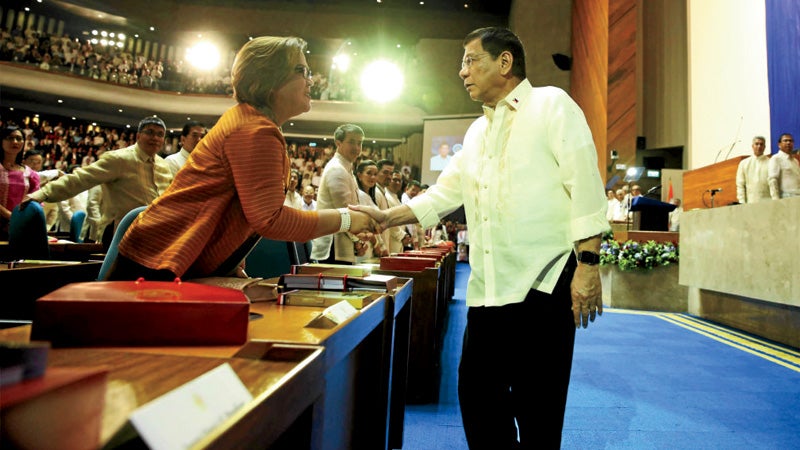 SONA SIDELIGHT Sen. Leila de Lima and President Duterte may be at loggerheads when it comes to the issue of human rights, but a warm handshake just before the President’s first State of the Nation Address on Monday shows there’s nothing personal in their attacks against each other. PRESIDENTIAL PHOTOGRAPHERS DIVISION

For De Lima, the gesture was the President’s way of dispelling “some notion that we are mortal enemies.”

The senator said she was taking the smirk “positively, in the sense that it could be a warm, friendly gesture, sort of an ice breaker.”

She added: “On my part, I never take anything personally and I never take him personally. Maybe it’s the same for him. By that gesture, he was able to show that he does not take things personally even if we don’t agree on some serious matters. That’s how I interpret it,” De Lima said.

The President may have just wanted to show that “even if we have differences on certain issues, as a matter of principle—because I have my own beliefs, I have my own advocacies, [and] he has his own principles, beliefs and advocacies for governance—we don’t take things personally,”  the senator said.

Mr. Duterte and De Lima have long been at loggerheads on certain issues, among them human rights.

During her stint as justice secretary, the former chair of the Commission on Human Rights had pursued an investigation of summary executions attributed to the Davao Death Squad, a vigilante group to which Duterte had been implicated. The investigation fizzled out for lack of evidence.

At the height of the election campaign in May, Mr. Duterte had famously told De Lima through the media to “shut up!” and threatened to file charges against her for her alleged failure to stop the drug trade within the walls of the national penitentiary when she was justice secretary.

More recently, De Lima called for a Senate inquiry into the spate of killings of alleged drug pushers and crime suspects in police operations, saying certain cases bore the hallmarks of summary executions.

In response, members of the Duterte Cabinet accused De Lima of coddling drug convicts at the New Bilibid Prison, charges which the senator had denied.

Asked whether some Bedan schoolmates were trying to patch things up between her and the President, De Lima said some had expressed concern about the perception that they are enemies.

“But that’s just the impression of many [people], [that] I’m supposed to be (Duterte’s) nemesis, that we are fighting. But our fellow Bedans know that’s not the case,” she said.