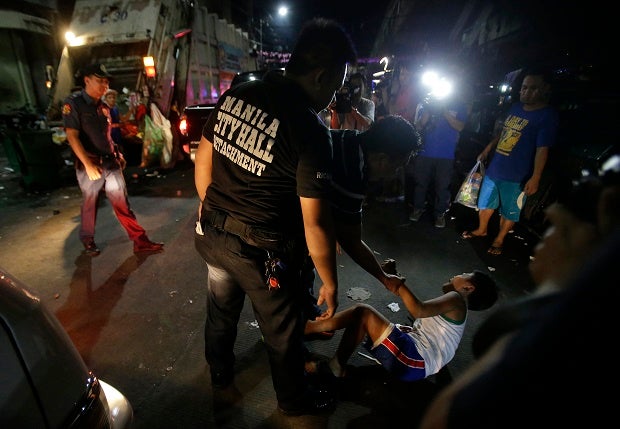 IN WHAT appears to be the first major setback in President Duterte’s war on criminality, the Supreme Court on Tuesday issued a temporary restraining order (TRO) on a 10 p.m. to 5 a.m. curfew clamped in Manila, Quezon City and Navotas.

The court issued the directive to the three cities after a youth group said their curfew ordinances were contrary to Republic Act No. 9344, or the Juvenile Justice and Welfare Act.

“Respondents local governments of Quezon City, Manila and Navotas are directed to comment on the petition within 10 days from notice,” the court’s briefer said on Tuesday.

The injunction was based on the petition of Samahan ng Progresibong Kabataan (SPARK), which said the ordinances were “unjust and repressive” and constituted a restriction on freedom of movement and travel.

Curfew ordinances in Manila were implemented by city police units under the so-called “Oplan Rody” (Rid the Streets of Drunkards and Youths) that led to roundups of minors who remain outside their homes during curfew hours, along with adults caught drinking liquor or going shirtless in public.

The group’s lawyer, Jesus Falcis III, argued in a 39-page petition filed on July 21 that “the curfew ordinances were unconstitutional because it deprived minors of the right to liberty and the right to travel, without substantive due process.”

The ordinances violate Juvenile Justice and Welfare Act or RA 9344 that considers curfew violations as status offenses, according to Falcis.

Status offenses are those that discriminate against a child, such as curfew violations, truancy, parental disobedience. Under the law, curfew violations imposed on children have no penalty or sanctions.

The group argued that curfew ordinances in Manila had sanctions on offenders below 18 years old that range from admonition, reprimand up to imprisonment of 1 to 10 days or P2,000 fine.

The group cited cases of unjust apprehension on individuals, such as the case of a student of Pamantasan ng Lungsod ng Maynila whose classes ended at 9 p.m. and had to travel for two hours going home.

In a text message to the Inquirer, Quezon City Mayor Herbert Bautista welcomed the court’s TRO.

“It is best that the Supreme Court look into the constitutionality of the city ordinance for the city government’s guidance,” Bautista added.

Passed in 2014, Ordinance No. 2301, or the Quezon City Discipline Hours for Minors, prohibits minors from loitering in public places from 10 p.m. to 5 a.m.

The aim is “to further protect the youth and keep them from getting involved in crimes and illegal drugs.”

It does not only cover residents of the city but also those who will be apprehended violating the ordinance within the territory of Quezon City.

A fine of P2,000 or 48 hours of community service is given to first-time offenders.

Navotas Mayor John Rey Tiangco said the city would comply with the court directive, but he pointed out that it did not prohibit the sounding of the siren to alert the public at 10 p.m.

“It also doesn’t stop the barangays from calling the children’s parents that it’s already 10 p.m. and tell them ‘you might want to tell your children to come home,’” Tiangco said.

Manila Mayor Joseph Estrada said he had never implemented the curfew ordinance passed in 2002. He said the Philippine National Police may enforce orders without going to his office.

He also said getting kids home at night was the job of barangay officials.

Estrada said he supported Mr. Duterte’s all-out war against drugs. “We are both like that. I always coordinate with barangay chairs, because they are the ones who can really help the police and the office of the mayor. They really know who the drug users and pushers are in each barangay,” he said. With reports from Maricar B. Brizuela and Kristine Felisse Mangunay