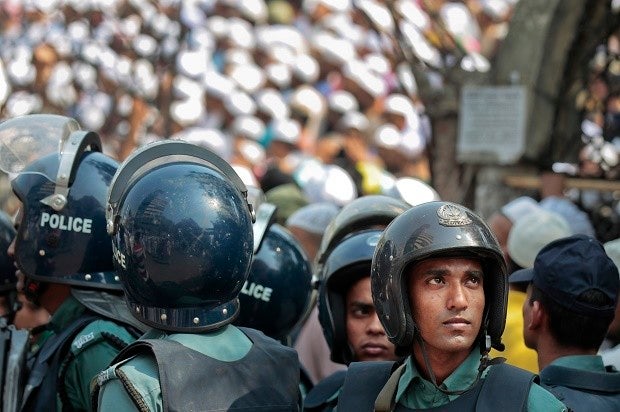 In this March 25, 2016, file photo, Bangladeshi policemen stand guard outside Bangladesh national mosque as members of various Islamic political groups and other Muslims attend Friday prayers before a protest in Dhaka, Bangladesh. The July 1, 2016 deadly attack, the worst in a wave of violence waged by radical Islamists in recent years, speaks to a deeper divide within the nation of 160 million – one that has pitted secularists against those yearning for Islamic rule since the country won independence from Pakistan in a bloody war in 1971. AP FILE PHOTO

Inspector General of Police A.K.M. Shahidul Hoque said the raid took place in Dhaka’s Kalyanpur area and one suspect was arrested and he was being treated with injuries in a hospital.

Hoque said officials were still investigating to see which group the men belonged to, but their clothing and other evidence showed it was likely that they belonged to local banned group Jumatul Mujahedeen Bangladesh, or JMB. The group is blamed for a July 1 attack in Dhaka’s Gulshan diplomatic area, when 20 people, including Italians and Japanese, were killed when armed gunmen attacked a restaurant.

The Islamic State group claimed responsibility for the July 1 attack and for many other recent attacks on atheist bloggers, foreigners and minority groups, but authorities have rejected the claims, saying there are no signs of the group having any existence in the country. Instead, the government says the local militant groups including the JMB are behind such attacks that have drawn global attention.

READ: Rising violence in Bangladesh: What’s behind it?