At least 19 killed, about 20 injured in knifing near Tokyo 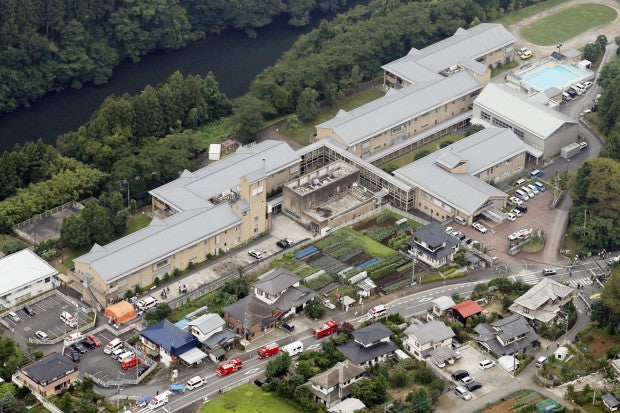 Ambulance vehicles and fire trucks are seen outside a facility for the handicapped where a number of people were killed and dozens injured in a knife attack Tuesday, July 26, 2016, in Sagamihara, outside Tokyo. AP

SAGAMIHARA, Japan — (Updated) At least 19 people were killed and about 20 wounded in a knife attack Tuesday at a facility for the handicapped in a city just outside Tokyo in the worst mass killing in generations in Japan.

Police said they responded to a call at about 2:30 a.m. from an employee saying something horrible was happening at the facility in the city of Sagamihara, 50 kilometers west of Tokyo.

A man turned himself in at a police station about two hours later, police in Sagamihara said. He left the knife in his car when he entered the station. He has been arrested on suspicion of attempted murder and trespassing.

Officials in Kanagawa prefecture, which borders Tokyo, identified the suspect as Satoshi Uematsu, and said he had worked at the facility until February. Japanese media reports said he was 26 years old.

He entered the building about 2:10 a.m. by breaking a glass window on the first floor of a residential building at the facility, Shinya Sakuma, head of prefectural health and welfare division, said at a news conference.

Kanagawa Gov. Yuji Kuroiwa expressed his condolences to the victims.

The death toll could make this the worst mass killing in Japan in the post-World War II era.

A woman who lives across from the facility told Japanese broadcaster NHK that she saw police cars enter the facility around 3:30 a.m.

“I was told by a policeman to stay inside my house, as it could be dangerous,” she said. “Then ambulances began arriving, and blood-covered people were taken away.”

Japanese broadcaster NTV reported that Uematsu was upset because he had been fired, but that could not be independently confirmed.

The facility, called the Tsukui Yamayuri-en, is home to about 150 adult residents who have mental disabilities, Japan’s Kyodo News service said.

Television footage showed a number of ambulances parked outside, with medical and other rescue workers running in and out.

Mass killings are relatively rare in Japan, which has extremely strict gun-control laws. In 2008, seven people were killed by a man who slammed a truck into a crowd of people in central Tokyo’s Akihabara electronics district and then stabbed passers-by.

In 2001, a man killed eight children and injured 13 others in a knife attack at an elementary school in the city of Osaka. The incident shocked Japan and led to increased security at schools.

More recently, 14 were injured in 2010 by an unemployed man who stabbed and beat up passengers on two public buses outside a Japanese train station in Ibaraki Prefecture, about 40 kilometers northeast of Tokyo.

A man who lives near the site of the latest attack said he was shocked such an attack happened in the quiet, semi-rural area near Mount Takao, a mountain popular with hikers.

“I never imagined such a horrible thing happening,” said Chikara Inabayashi, who was tending his watermelon patch. “I was astonished, that’s the only thing I can say.”

Read Next
‘Gateway to afterlife’ found under Maya pyramid
EDITORS' PICK
10 Filipinos positive for COVID-19 in UK, 7 in Ireland — envoy
Nograles: Cabinet members to donate 75% of monthly salary to aid COVID-19 fight
Quick chat with Nicole Andersson: ‘You really don’t need much to be happy’
IATF to LGUs: Issue ordinances vs attacks on frontliners, COVID-19 patients
Diokno to Duterte: OK to make fun of buck tooth, but focus on people’s needs first
Robredo spox thanks Duterte for defending VP’s efforts vs COVID-19
MOST READ
Coronavirus hotbed Rizal to shut borders on April 6
Gov’t mulling quarantine period extension of 15-20 more days
ADB warns PH against prolonged lockdown
Sotto on Isko Moreno’s call: We do our job without the media following our every move
Don't miss out on the latest news and information.