After ceasefire, NDFP hopes political prisoners will be freed soon 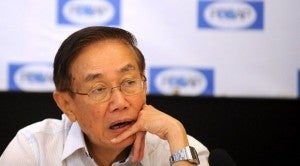 LUCENA CITY, Quezon — The National Democratic Front of the Philippines (NDFP) was elated by President Duterte’s announcement of a unilateral ceasefire in military operations against the communist armed wing New People’s Army and expressed hope the Chief Executive would release political prisoners soon.
A statement issued by the NDFP on Monday afternoon said Luis Jalandoni, the NDFP peace panel chair, had written Labor Secretary Silvestre Bello III, the government peace panel chair, to welcome the President’s announcement in his State of the nation Address (SONA) that he was ordering a unilateral ceasefire with the New People’s Army.

“Jalandoni assumed that the ceasefire declaration of the [government] is necessarily connected with the release of all current political prisoners under the amnesty proclamation to be issued by President Duterte and concurred in by a majority of Congress,” the NDFP statement said.

This, the NDFP said, was agreed upon by representatives of the Philippine government and NDFP panel who met in Oslo, Norway in June.

Jalandoni said he has been looking forward to the resumption of the formal talks in Oslo from Aug. 20 to 27.  SFM

Read Next
‘Thou shall not kill’ drive launched vs antidrug war
EDITORS' PICK
UK’s Boris Johnson will resign, BBC reports
Unemployment rate up to 6% in May
Geek out at TOYCON 2022 powered by Smart Signature
High inflation: Your P1 is now worth only 87 centavos
High-risk pregnancy: Reducing your risk is in your hands
House energy committee chair Arroyo bats for cheap electricity
MOST READ
Suspect in grisly killing of missing woman in Bulacan arrested
Kim Atienza’s daughter flaunts bikini body in response to critics of her ‘revealing photos’
Japanese artist who created ‘Yu-Gi-Oh!’ found dead in the sea
UK PM quits as Conservative leader
Don't miss out on the latest news and information.