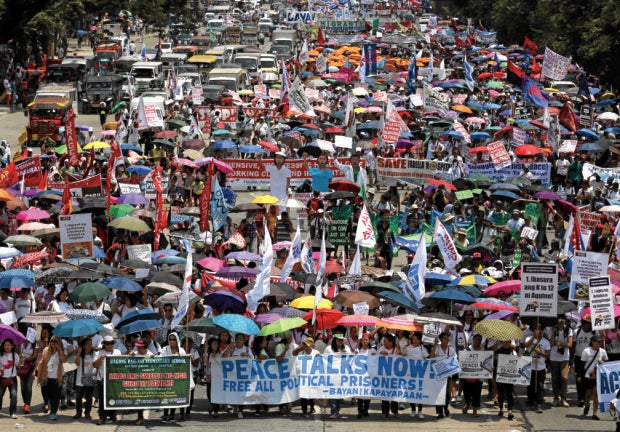 More than 30,000 people join in the ‘historic’ and ‘peaceful’ rally during President Rodrigo Duterte’s first State of the Nation Address. RAFFY LERMA

The militant lawmakers in the House of Representatives on Monday lauded President Rodrigo Duterte for a “heartfelt” State of the Nation Address (Sona), especially with the president’s announcement of a ceasefire with the communist rebels.

Zarate said Duterte’s call for a unilateral ceasefire with the Communist Party of the Philippines-led New People’s Army and the National Democratic Front a welcoming development especially with the release of political prisoners as a confidence building measure to resume the peace talks.

“His Sona is stated what the people want and need. His declaration of a unilateral ceasefire with the CPP-NPA-NDF is most welcome and the subsequent release of political prisoners would be a great confidence building measure to jumpstart the formal peace negotiations to finally address the root causes of the armed conflict,” Zarate said.

For her part, Kabataan Rep. Sarah Elago in a statement said she congratulates Duterte for his Sona that offers hope and challenges especially on the peace talks with the communist rebels.

“We express our warm congratulations to President Duterte for his first Sona, especially for bravely offering a goodwill measure to the CPP-NPA-NDF by announcing a unilateral ceasefire on the part of the government,” Elago said.

“This is a welcome development that will surely boost our chances of having a successful formal peace agreement with the NDF before the president’s term ends,” she added.

Elago lamented though the “mixed signals” in the president’s Sona especially about the spate of summary killings of suspected drug criminals.

Elago said though Duterte vowed to “promote and protect the human rights of our citizens” and that the “rule of law shall at all times prevail,” the president mocked the viral photo published in the banner of the Inquirer on Sunday of Jennelyn Olaires weeping while hugging her husband Michael Siaron, a pedicab driver and alleged drug pusher shot and killed by motorcyle-riding men in Pasay City.

“The president is sending mixed signals as regards the spate of killings in connection with his administration’s anti-illegal drug campaign. On one hand, he promised to respect the rule of law, yet he veered off from his speech at one point to short of mock the media handling of the recent spate of drug-related killings,” Elago said.

Elago pleaded to the president to “always and always adhere to due process and the rule of law in its fight against illegal drugs.”

For his part, Act Teachers Rep. Antonio Tinio lauded the pro-people policies of President Duterte, including the lowering of income tax, no demolition of informal settlers without relocation, a review of mining permits, and industrialization to generate jobs.

“We laud the many pro-people policy pronouncements made by Pres. Duterte in his inaugural Sona, foremost of which is his unprecedented declaration of a unilateral ceasefire with the CPP-NPA and commitment to a just and lasting peace within his term,” Tinio said in a statement.

“Many of his pronouncements coincide with the demands that we in the progressive movement have been clamoring for over the years, such as the lowering of income tax, no demolition of informal settlers without relocation, review of mining permits, and emphasis on industrialization to generate jobs. We are committed to supporting such initiatives in Congress to ensure that promised change under the Duterte administration will benefit the poor and marginalized,” he added.

The members of the Makabayan bloc in Congress also joined the majority bloc after they elected for the bid of the winning Speaker Pantaleon “Bebot” Alvarez. TVJ

Read Next
Angara lauds Duterte for mentioning tax reform plan in Sona
EDITORS' PICK
Infants bundled off; no one hurt in PGH fire
Tired of your Wi-Fi signal problems at home? Here’s a solution!
OPINION: Mischief Reef – where it all started
POVA x Mobile Legends Bang Bang: A partnership that’s built to win
CPA Australia and their designation: Advance your career
Fire-damaged PGH calls for donations
MOST READ
Leonen impeachment case moves forward in House
Hot, humid weather for PH on Monday — Pagasa
Longest recession since Marcos era
Long working hours are a killer, WHO study shows
Don't miss out on the latest news and information.