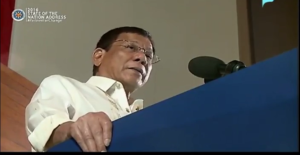 DAVAO CITY – The National Democratic Front of the Philippines welcomed the declaration of a ceasefire by President Duterte during his State of the Nation Address on Monday afternoon, adding that the Duterte administration and the communist rebels have been moving in the same direction to achieve just and lasting peace.

Communist Party of the Philippines founder and NDFP chief political consultant Jose Maria Sison told the Philippine Daily Inquirer that the ceasefire was appreciated by the revolutionary movement.

“I welcome President Duterte’s announcement of a unilateral ceasefire of the AFP (Armed Forces of the Philippines and the PNP (Philippine National Police) in relation to the NPA,” Sison said.

But the communist groups did not immediately declare a corresponding ceasefire in guerilla operations against the Philippine military.

Sison said that they were in the same direction with Duterte in addressing the conflict.

“We share with President Duterte the determination to resume the formal talks and work for a just and lasting peace,” Sison said.

Duterte appealed to the communist movement for them to work together to end the conflict.

“To the CPP/NPA/NDF, let us end these decades of ambuscades and bloody skirmishes. We are going nowhere. And it is getting bloodier by the day,” Duterte said.

“To immediately stop violence on the ground, restore peace in the communities and provide an enabling environment conducive to the resumption of the peace negotiations, I am now announcing a unilateral ceasefire with the CPP/NPA/NDF effective immediately. I expect and call on our fellow Filipinos in the National Democratic Front and its forces to respond accordingly,” Duterte said.

The NDFP, however, is yet to issue an official statement on whether they would reciprocate Duterte’s declaration of a unilateral ceasefire.

Both panels are set to meet in Oslo, Norway, from Aug. 20 to 27, to resume the stalled formal talks.

The Philippine government panel and the NDFP agreed at the preliminary talks in Oslo to discuss five agenda items in the formal talks, including the affirmation of previously signed agreements like the Comprehensive Agreement on Respect for Human Rights and International Humanitarian Law (CARHRIHL).  SFM/rga