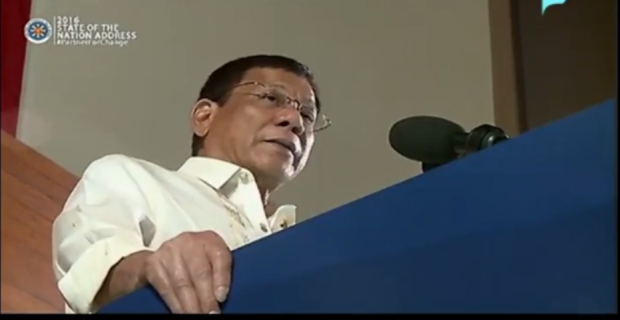 President Rodrigo Duterte on Monday digressed from his speech to assure Filipinos that his administration will be a clean one.

“Kung gusto niyo ng madalian, nasa inyo ‘yan (If you want it done quick;y, it is up to you). If you give it fine, fine. If you don’t we will take the longer route, slowly,” Duterte said.

He allayed fears that in seeking emergency powers, it would equate to committing acts which would constitute graft and corruption.

“It is an immediate situation and solution, Gusto niyo madali (you want it fast), OK. Kung ayaw niyo kasi baka (if you do not want it for fear that it might be) graft and corrupt, eh di (it’s) OK. But I assure you wala ito sa script. I assure, this will be a clean government,” the firebrand President said.

Duterte even jested that he would accept opposition from the legislature.

“And tanggapin ko ‘yung pagmumura niyo. Huwag lang sa malapit (I can accept your curses, but just don’t do it to my face),” he joked. IDL/rga