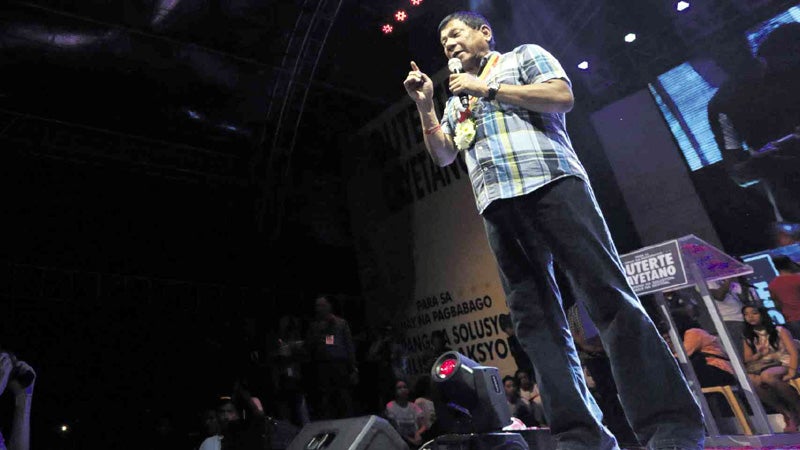 Accountability and due process amid the wave of killings of suspected drug pushers and users, most of them poor, are among the hot-button issues that President Duterte should speak about in his first State of the Nation Address (Sona), according to people interviewed by the Inquirer.

Other issues include the President’s stand on the Paris pact on climate change, conditional cash transfer and poverty alleviation, the South China Sea dispute, the monster traffic jams in Metro Manila, K-12 program and corruption.

“While we condemn the killings that are happening around the world, I am appalled at the silence when it comes to vigilante killings. What are his plans regarding this and how will he guarantee that this will not further scare the people?’’ said Graziella B. Almasco, a car sales executive in Bonifacio Global City in Taguig.

Almasco said she wanted “to know why out of the 500 who were killed, a majority were poor?”

Dean Bocobo compared the extrajudicial killings of drug suspects to the Mamasapano incident in which 44 members of the PNP Special Action Force died in Maguindanao province in 2015 when they ran into Moro rebels after they shot and killed an international terrorist.

“#EJK is already DU30’s ten-fold Mamasapano. Will he take Command Responsibility for the BLOODBATH or like PNoy, shirk it?” Bocobo tweeted.

Saul de Jesus has had enough of the killings. “#PresidentDuterte Please put a stop to extrajudicial killings.”

Kim Quilinguing, a media production specialist at the University of the Philippines System Information Office, said the Sona should touch on human rights violations.

“He should express his views on his administration’s commitment to the observance of due process and respect for civil liberties,” he said.

Rommel Copuyoc, a mechanical engineer, wanted to know how the President could restore the people’s trust in the police. “Before they engage in killings, the police should be credible first … What will happen to the policemen who were proven to have killed innocent people?”

Mr. Duterte “has command responsibility for the alarming number of deaths of [alleged] pushers not even proven yet to be culpable,” said Gino Leocadio Paje, a special investigator at the Department of Environment and Natural Resources (DENR).

But other Filipinos appeared not to be bothered at all by the killings.

“For sure President Duterte will talk about his campaign against illegal drugs. That’s one of the good things that he has started and I hope it will continue. It’s all over the news and I believe he will give us an update on this issue,” said Josephine Gongora, a fish vendor in Olongapo City.

Noemi Frondarina, a spa owner in Guiguinto, Bulacan province, expected the President to continue the crackdown on illegal drugs and push for the restoration of the death penalty. “I support these initiatives,” she said.

“I want to hear President Duterte name mayors and other politicians who are involved in illegal drugs,” said Elizar Lauro, a college student and part-time mall clerk in Tagum City.

“I hope that during his Sona, President Duterte will talk about killings involving media practitioners in the country and solve them, and at the same time, give an assurance that our constitutional rights, like freedom of expression, will be protected,” Salarda said.