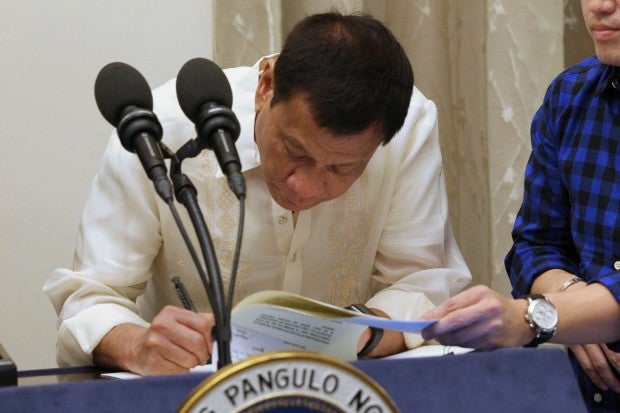 Various media groups praised President Rodrigo Duterte for signing the executive order on freedom of information to b9lster transparency and accountability in the government.

“This is a gesture we are sure not only media but everybody who believes transparency and accountability indispensable to good governance and democracy highly appreciates,” NUJP Secretary General Dabet Panelo said.

AlterMidya National Chairperson Luis Teodoro said that the EO is “an important step in promoting transparency and accountability in government as well as in the exercise of press freedom.”

“The EO will be useful for anti-corruption advocates and journalists to follow the transactions of government agencies especially on the use of public funds and other matters concerning the executive branch,” said Callueng.

On the list of exceptions that will be covered by the order, Panelo and Teodoro expressed hope that these would not dilute the essence of the directive and restrict access to information.

“Although the bill seems better than the version of the bill that the previous administration had endorsed in Congress, we hope that any exceptions to the EO’s coverage will not dilute its essence and intent,” Panelo said.

“The question now is how long will the list of exceptions be. If too long, the list may restrict rather than expand access to information,” Teodoro added.

“If crafted and implemented well, a Freedom of Information Act will enhance and strengthen democracy. Without accessible information from all branches of government that they are tasked to monitor, journalists cannot fulfil their ‘fourth estate’ responsibility.  At the same time, neither can citizens access the information needed in demanding accountability across the public sector,” Teodoro said.

The EO will cover all agencies under the executive branch, including government-owned and controlled corporations and state universities and colleges. JE/rga