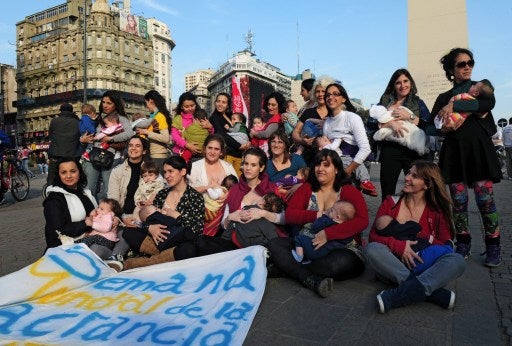 A group of women breastfeed their children at Republic square in Buenos Aires on August 4, 2013, during a self-organized demo to promote breastfeeding and break down the prejudice of doing it in public. On Saturday, hundreds of Argentinian women breastfed in public to protest the prevention of a woman to publicly breastfeed her baby. AFP FILE

BUENOS AIRES, Argentina — Hundreds of women turned out in Argentina to breastfeed in public Saturday, in protest at the removal of a mother for nursing publicly in a Buenos Aires square last week.

Waving signs that read “No repression; nursing is not up for discussion” and “My breasts, my rights; I’m not interested in your opinion,” some 500 women demonstrated in support of Constanza Santos, who police took from the square for nursing her nine-month-old.

Instead of a sit-in, some called the protest a breastfeed-in.

Supporters said the case was disturbing and that they were not going to let mothers’ rights be trampled on.

Similar demonstrations were held in other cities, including Mar del Plata, Tucuman and Neuquen.

“This is great because it sheds light on a problem. And police need to be on the public’s side and not work against them,” said Argentine human rights activist Adolfo Perez Esquivel, the 1980 Nobel peace laureate./rga