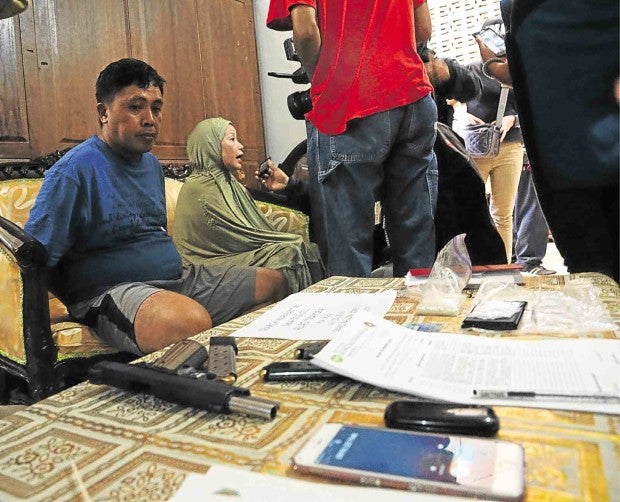 CAGAYAN DE ORO CITY—Authorities arrested a former Lanao del Sur mayor who allegedly heads a drug syndicate that operates in five of Mindanao’s six regions, her soldier-husband and several other suspects during a raid here on Saturday.

The Philippine Drug Enforcement Agency (PDEA) in Northern Mindanao considered the arrest of former Maguing town mayor Johaira Abinal as one of its major accomplishments in the antidrug campaign of President Rodrigo Duterte.

Armed with a search warrant issued by a local judge, operatives of the PDEA and the Cagayan de Oro City police office stormed the compound owned by Abinal and her husband, Army Maj. Suharto Macabuat in Grand Ballon in Barangay Kauswagan here around 11 a.m.

Major Macabuat is assigned to the Philippine Army headquarters in Fort Bonifacio.

Seized inside the couple’s two-story house, where other individuals also reside, were packets of suspected shabu weighing 200 grams, cash and a .45 cal. pistol with live ammunition.

Also arrested during the operation was Sonny Santican, also an alleged member of the drug ring, and six other individuals.

“If the orders are huge, [the payment is done] through bank to bank transactions, and on consignment basis,” Alvaro said.

Alvaro said the group obtains its supply from Chinese drug lords in Manila and has been in the illegal drug trade for the past 15 years.

“This is the first time group members had been arrested,” he said.

In Glan, Sarangani, Mayor Victor James Yap warned the 1,693 confessed drug users and pushers, who surrendered there on Wednesday, against returning to their illegal activities.

“If they abide by the terms and conditions of their surrender, the local government will do whatever it takes to help them start a new life. If not, sorry, but their family will be spared the funeral expenses,” he said.

Aside from providing free cemetery lots, free coffins and free funeral services for slain drug suspects, Yap said the municipal government would also shoulder other funeral expenses, including for foods and drinks served during the wake.

“Their family will be spared the funeral expenses,” he said.

Yap said those who would permanently stop their vices and get out of the drug trade after their surrender would be given free rehabilitation and technical training programs.

He also offered interest-free loans from his own pocket for “retired” drug pushers, so they could start new businesses. Those wanting to look for jobs in other areas or abroad would also be provided financial cash assistance to defray their expenses in applying for jobs.

“I say to you now and I won’t say it again: reform or rest forever in peace,” Yap said. With a report from Allan Nawal, Inquirer Mindanao