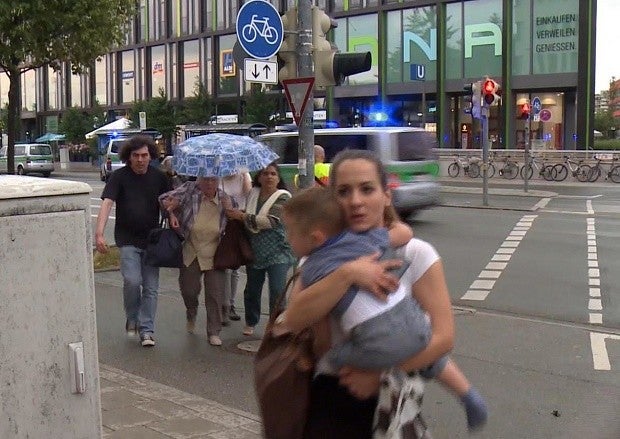 Members of the public run away from the Olympia Einkaufszentrum mall, after a shooting, in Munich, Germany, Friday, July 22, 2016. A manhunt was underway Friday for a shooter or shooters who opened fire at a shopping mall in Munich, killing and wounding several people, a Munich police spokeswoman said. The city transit system shut down and police asked people to avoid public places. AP

MUNICH — Police in Munich say they are hunting for a motive that might explain why an 18-year-old German-Iranian man opened fire at a crowded shopping mall and a McDonald’s, killing nine people and wounding 16 others before killing himself.

Some 2,300 police from across Germany and neighboring countries were scrambled late Friday when the Bavarian capital declared an “emergency situation” after reports of shots fired at a McDonald’s near the Olympia Einkaufszentrum mall.

A Munich police spokesman, Peter Beck, said Saturday morning that security restrictions have been lifted and public transport is operating as normal.

Beck told The Associated Press that “with regard to the suspect we have to examine everything, but we don’t know yet what triggered the crime.” He says officers are still collecting evidence at the scene.