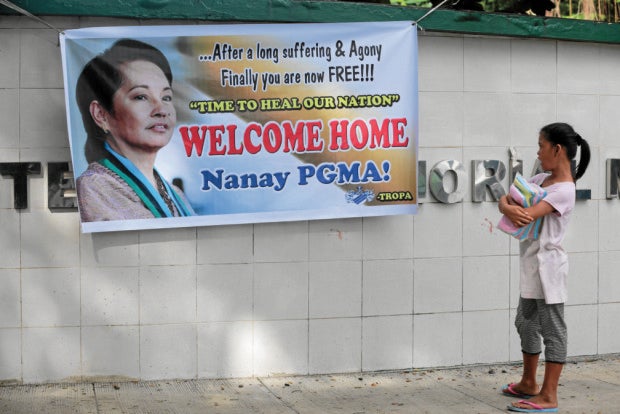 Former President Gloria Macapagal-Arroyo is considering seeking medical attention for her spinal problems in either Japan, Germany or the United States, according to her lawyer, Raul Lambino.

Lambino said there were no specific plans yet and would depend on the results of preliminary tests here.

“It would depend on the results of the preliminary checkup being done at St. Luke’s (hospital). Based on that, they would know where she should go to seek more specific, more detailed treatment abroad,” Lambino said.

Arroyo checked in at the St. Luke’s Medical Center in Quezon City before 9 p.m. on Thursday. She was released from four years of detention at the Veterans Memorial Medical Center earlier that day and had first proceeded to her home in La Vista, Quezon City.

The Supreme Court on Tuesday dismissed plunder charges against Arroyo in connection with the alleged diversion of Philippine Charity Sweepstakes Office funds for lack of evidence and ordered her freed.

She was discharged from the hospital yesterday afternoon. Early results were not announced although a former Cabinet secretary said her cholesterol was “remarkably high.”

Jude Trinidad, the hospital’s corporate communications officer, said Arroyo left the hospital through the “back door” at 2:30 p.m., avoiding the media who had staked her out at the main entrance since early morning.

“Someone else assisted (Arroyo). And that someone told us to tell you that she already left (St. Luke’s),” Trinidad told reporters.

Asked who Arroyo was with and if she was on a wheelchair when she left, Trinidad said he did not have those details.

Former Justice Secretary Agnes Devanadera told reporters in a text message prior to the former president’s discharge that Arroyo would return to St. Luke’s for tests, but “there’s no schedule yet.”

“Some tests were done last night (Thursday night) and the others were done today. Some of the results of her tests are not yet in,” Devanadera said, without going into specifics.

Remedios Poblador, Arroyo’s former secretary for special concerns, said on Thursday the Pampanga representative underwent a chest X-ray, a liver ultrasound and an electrocardiogram, among others. A blood test was scheduled the following day (Friday), she added.

“As for her blood works, her cholesterol is remarkably high which bears watching,” Devanadera said.

Former Candaba Mayor Jerry Pelayo, who arrived a few minutes after the media was informed of Arroyo’s discharge, said the former president did not allow visitors yesterday because “she only underwent a checkup (puro checkup lang siya).”

He said he was supposed to ask her when she would visit Pampanga so he could talk to the local leaders there about preparations.

Meanwhile, Lambino quelled speculations that Arroyo would use her possible medical trip abroad as an excuse to stay away from the country.

“She has faced the most difficult part of her life. She had been incarcerated for no crime that she has committed. She is innocent. If ever she travels abroad for medical treatment, that is really the reason why she is going. I can definitely say that she will come back if ever the time comes she leaves the country,” he said.