A plea for peace, not mercy 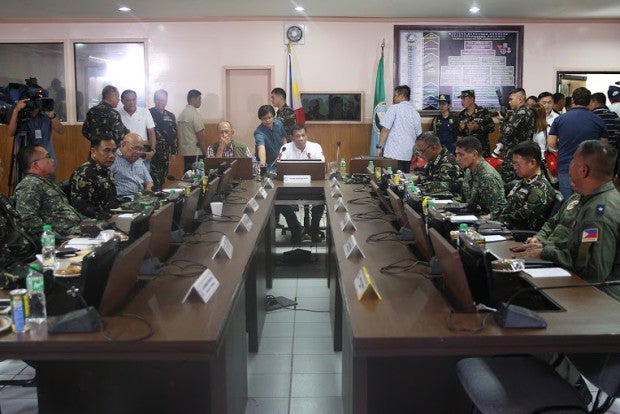 “I AM PLEADING for peace, including to the Abu Sayyaf—they have committed so many crimes, killing people,” said the commander in chief of the Armed Forces of the Philippines and the Philippine National Police, referring to the bandit group blamed for extortion and kidnapping hostages whose governments refuse to pay ransom.

The Abu Sayyaf bandits are making a big mistake if they think that the President is a doormat just because he is pleading for peace.

These bandits, who terrorize non-Muslims, should know what this guy Digong is capable of since they, too, are from Mindanao.

Digong was already mayor of Davao City when San Pedro Church was bombed years ago, resulting in the death and injury of many churchgoers.

Terrorists were suspected of being behind the dastardly act.

Several days later, the city’s mosque was bombed and this attack claimed the lives of many worshippers.

After a bomb exploded in Davao City’s Bangoy Airport years ago, again resulting in numerous deaths and injuries, many Muslim residents in the city who were suspected of having knowledge of the terrorist act disappeared.

So, Mano Digong’s plea for peace was a sign of aggravation, not a call for mercy.

A person in a state of aggravation or intense anger resulting from an injury would surely retaliate.

To peace-loving Muslim brothers and sisters, you may want to ask your fellows who continue to terrorize the whole population to stop provoking Digong’s government into drastic action.

Yes, nobody wins in a war of retaliation, but the side which has the numbers will surely overrun the one with less members.

Some members of the PNP’s Criminal Investigation and Detection Group (CIDG) in Puerto Princesa City made a killing when they invested in a Ponzi scheme.

A Ponzi scheme is an investment scam wherein early investors are paid off with the money put up by the later ones to encourage bigger investments.

An estimated P300 million was swindled from numerous residents in Puerto Princesa by an investment company which has since closed down.

The CIDG members, six in all, invested P2.3 million in the company and got back P7.4 million after several days.

The CIDG agents in Puerto Princesa knew they were dealing with a swindling racket, so how come they didn’t arrest the company’s owner but instead invested in it?

Ruel Batuto, a freelance baseball coach, was driving his motorcycle home when he fell into a public works digging on Coastal Road, Parañaque City, on Monday.

The road digging didn’t have any sign warning motorists and pedestrians.

It was left unattended by workers from the DM Consunji Inc. (DMCI), which was contracted by the Department of Public Works and Highways (DPWH).

Fortunately for Batuto, Parañaque City Hall initially gave him P10,000 for hospitalization even though the digging was not being undertaken by the local government.

The public service program “Isumbong Mo Kay Tulfo” is helping Batuto file a case for damages against DMCI and the DPWH.