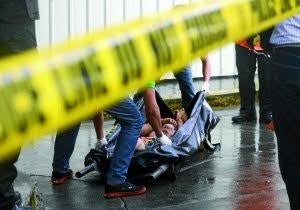 On Tuesday, Romnick was found dead on Sixto Cuevas Street in Barangay Kalawaan around 1:30 a.m., four hours after he left their house.

But it took five more hours before his sister and his mother realized that their family member had been killed. They were watching an early-morning news report on TV and recognized the corpse being shown onscreen.

They recognized the blue sando and denim pants, the tattoos on the neck and right leg. They could tell it was Romnick even though the face was wrapped with packaging tape.

Robles, 57, told investigators that she had been hearing rumors since last month about her son being a drug user but Romnick denied this when she confronted him.

The young Robles was the fifth apparent victim of summary execution to be found dumped on the streets of Pasig this month.  SFM