Bato brings SAF to Bilibid, taunts VIP inmate: Do a song for me | Inquirer News

Bato brings SAF to Bilibid, taunts VIP inmate: Do a song for me 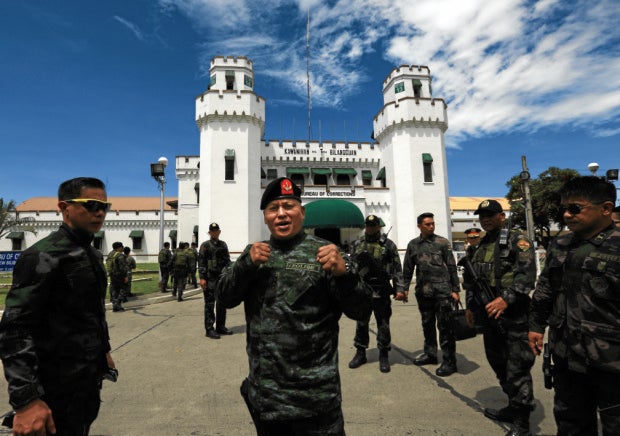 Change (of guards) has come to New Bilibid Prison (NBP), with high-profile inmates the first to experience the tighter security being enforced by the elite Special Action Force (SAF) of the Philippine National Police.

The three prisoners appeared nervous and gave meek replies as Dela Rosa asked them questions. Co kept his eyes down even though the PNP chief told him to “look at me.”

Colangco said yes when asked by Dela Rosa if he was “the singer,” alluding to the concert and recordings he was allowed to do while in prison. He was ready with another yes when the stocky PNP chief told him to compose a song for him.

A total of 320 SAF troopers began their watch at the NBP on Wednesday, replacing 220 jail guards who will undergo “reeducation and retraining,” according to Justice Secretary Vitaliano Aguirre II.

The SAF troops kicked off their NBP duty—which Aguirre said would be done in rotation with members of the Philippine Marines every two months—by searching Building 14 for contraband.  The building’s occupants included Colangco and Co.

The search yielded mobile signal boosters, which Aguirre said were being used by the inmates to counter signal jammers, along with a TV set, cigarettes and cash.

Dela Rosa, who addressed the SAF troopers at the NBP before they assumed their new assignment, expressed confidence that they would be “incorruptible.”

“I am with you in your loyalty, integrity, professionalism. I know that you are with me, too,” he said. “Do not allow yourself to be bribed. One report that you accepted a single peso or even a candy wrapper will destroy everything.”

Aguirre expressed optimism that putting the SAF in charge of security at the NBP would help end widespread corruption in the facility.