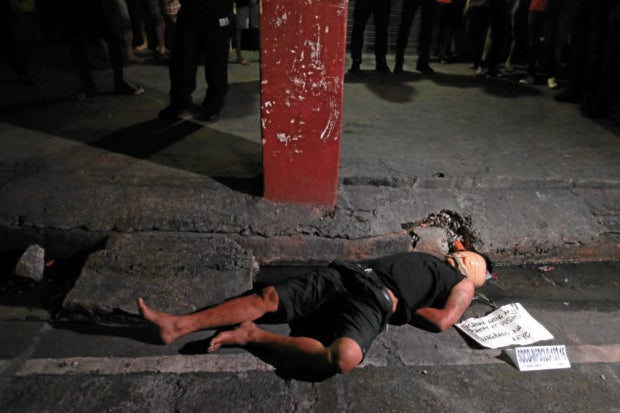 In this July 17 file photo, a body of an alleged drug pusher and robber, whose face is wrapped in packaging tape, hands bound and stabbed several times in the chest, is found along Lerma Street, Sampaloc, Manila. RAFFY LERMA

A Catholic bishop on Wednesday expressed alarm over the spate of killings in the country amid the administration’s ongoing drive against criminality and illegal drugs trade.

Amid rising body count, Balanga Bishop Ruperto Santos said law enforcers should look at suspects as not mere numbers but as human beings with rights to due process.

“It’s not simple to just deal with the numbers when human beings are concerned. We have to look at the people behind the numbers,” Santos said over church-run Radyo Veritas.

Santos noted that respect for the dignity of human life must be maintained amid the government’s relentless war against illegal drugs trade.

“We must remember always that every human life counts.

Every human being is a child of God. In fighting crime and in maintaining peace and order we must not respect for life,” he said.

The Philippine National Police has confirmed the killing of about 200 drug suspects. TVJ