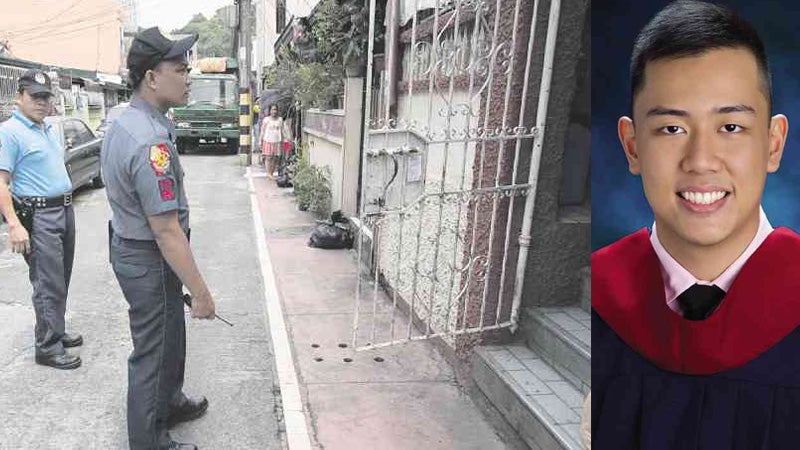 TRIBUTES poured in for an Ateneo High School teacher who was shot dead on his way home on Monday night by an unidentified gunman.

In tweets and posts on social media, netizens and members of the Ateneo community expressed grief and sadness at the death of Ateneo teacher Emmanuel “Em-J” Jose Pavia, 24, who sustained three gunshot wounds in the head and back.

Chief Insp. Eduardo Cayetano, chief of the station investigation unit of Marikina City Police, said his men were looking into the possibility that Pavia’s anti-illegal drugs advocacy may have something to do with his death.

But initial reports said Pavia was helping somebody who was being robbed that night when the gunman shot him along St. Joseph Avenue at Dela Costa Homes in Barangay Barangka, Marikina City, past 7 on Monday night.

At Ateneo High School, classes were suspended on Tuesday to give way to a 2:30 p.m. Mass in the covered court, where family, friends, fellow faculty and students paid their last respects to Pavia.

“Thank you for being one of the biggest inspiration to me. You taught me to smile no matter what happens. For that, I am eternally grateful,” one of his students wrote on the dedication wall next to the teacher’s coffin.

Twitter user Alvin Joseph Dolores described Pavia as an “A teacher. A modern-day hero. Not just another dead body.”

Alo Lantin tweeted that Pavia “died for being a good person.”

His former students and their parents also recalled how he was in the classroom. “I wish we could say ‘good bye and thank you sir’ one last time,” said Twitter user Ryan Herrera.

“He was ‘very close and inspirational to the boys,’” said an Ateneo parent.

Added another: “He was a favorite of a lot of kids even if his subject was math.”

In a phone interview with the Inquirer, the assistant principal for student affairs and formation, Ronan B. Capinding, described Pavia as “very young, funny, intelligent and thoughtful.”

Capinding added: “We are all still in shock and stunned by what happened. I am also really weary and sad after learning about the news last night.”

Pavia came from a family of teachers: his parents, Gerardo and Margarita Pavia, taught religion and math respectively, while a younger brother taught English, also at Ateneo. The youngest sibling is still in college.

An official of the Ateneo Homeowners Association who refused to be named, said that after the killing, neighbors saw a man on a motorcycle roaming the area around midnight of Monday and very early Tuesday morning.

The man, he said, was holding a bayong (native woven bag) and sat on a gutter.

Witness Honorato Olaguer, 76, Pavia’s neighbor, told police that he was inside his house when he heard three gunshots.

He then saw Pavia lying on the ground and rushed him to Amang Rodriguez Memorial Medical Center. Pavia was declared dead around 8:30 p.m.

Another longtime neighbor, Nora Gonzales, described Pavia’s family as very simple, peace-loving and had never been engaged in any fight before.

Friends who knew Pavia recalled how he motivated his students to strive for excellence.

On the Ateneo website, Pavia was quoted as saying during a school-wide reflection: “(A)im for the moon because that way, even if you miss, you’ll land among the stars.”

He also spoke of what he learned about true excellence from his former teacher, Onofre Pagsanghan.

Pavia’s English teacher in first year high school taught him “to believe that you don’t have to be doing something extra special, unique or different, to be considered extraordinary. Rather, you can just continue to do ordinary things, but do them extraordinarily well.”

Pavia was a natural leader even in high school, his friends recalled. “It was natural for him to be concerned for other people,” said Brian Tamase who had been friends with Pavia since 2008.

Pavia, Tamase said, had a “nice approach” to students. “He was always smiling and you just know he had a happy disposition… (which) was infectious.”

“He was the most reliable person I know. The most helpful. The kind of friend anyone would love having,” said Kevin Guiling, another of Pavia’s high school friends.

A photo of Pavia on Twitter showed his words projected on a screen during one of his classes. The words read: “As a teacher, my greatest and only wish is that at the end of it all, I hope my students (would) have grown to trust me in such a way that if I tried to push them off a cliff, they’d let me. They’d let me because at that point, they already know I’ll run to the bottom as fast as I can to catch them. Or (that) I wouldn’t have to, because I’ve already taught them how to fly.”

Orange B. Sanchez retweeted: “I am hurting. I am angry. I will never understand why. My heart is broken. Rest in peace my dear friend… This crazy, cruel, evil world doesn’t deserve an angel like you, @emjpavia.

Posted Jay Gregorio: “Goodnight to a great man, Emmanuel Jose Pavia, it is time to rest, friend. You will be missed but we know you are watching over us. God is with you, bless your soul.” With a report from Louie Greg A. Rivera