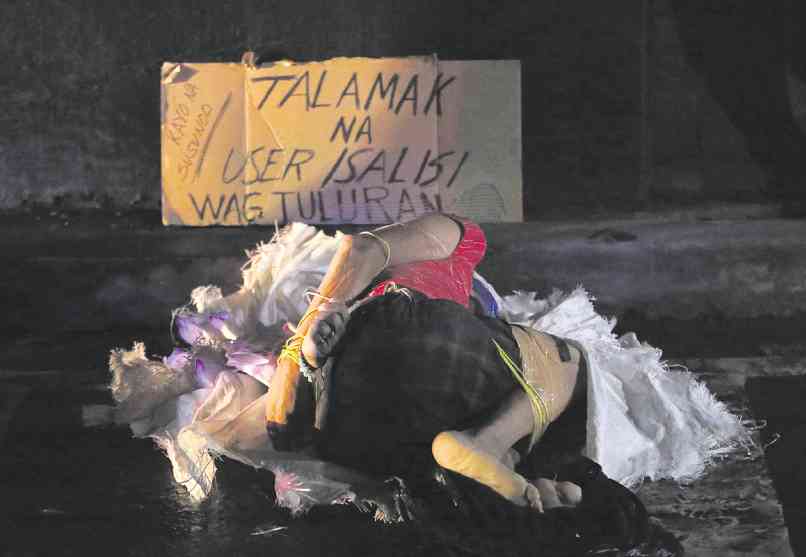 PRAY you don’t see this on your street. RAFFY LERMA

The Manila Police District (MPD) killed seven more drug suspects in just one night, including a man who was first arrested for going shirtless in the streets but allegedly yielded packets of “shabu” when frisked below the waist.

Edgar Acebuche was being booked for drug possession and violation of a city ordinance around 6 p.m. on Monday when he allegedly grabbed the gun of an officer, said Senior Insp. Joselito de Ocampo, chief of the MPD-Lacson precinct.

De Ocampo said Acebuche had two sachets of shabu in his pants’ pocket when apprehended by his men. As they were recording his case later at the precinct, Acebuche asked if he could go to the toilet.

With his handcuffs removed, Acebuche suddenly reached for the gun of PO1 Oscar Cruz and a struggle ensued. De Ocampo said he himself shot Acebuche in the chest, killing him on the spot, because he refused to let go.

Another drug bust, in Malate, led to the fatal shooting of Gerry Collado around 11 p.m.

MPD members in Baseco, Tondo, also killed Amir Amilul at his home on 11th Street, after they acted on a tip that several people were having a shabu session in another house nearby.

PO2 Rex Falgome said the officers caught Amilul and the group in the act. In the ensuing chase, Amilul was cornered in his house, where he allegedly drew a gun and was shot by the police before he could fire, Falgome said.

A man identified only as Erwin also died in a buy-bust operation around midnight in Quiapo. He was shot by SPO2 Rosendo Ascano after he allegedly drew a gun upon sensing the trap.

In other parts of Metro Manila, four more drug suspects—one shot by the police and the others by unidentified men—were killed in Makati, Taguig, Las Piñas and Muntinlupa cities also on Monday night.

In Muntinlupa City, a half-naked man described to be 35 to 40 years old was found dead with multiple gunshot wounds on the railway tracks in Barangay Tunasan, Tecson said.

National Capital Region Police Office director, Chief Supt. Oscar Albayalde, said that from July 1 to 17 in Metro Manila alone, a total of 70 drug suspects had been killed by the police, while 37 fell victim to vigilante killings. With a report from Faye Orellana

Read Next
Did You Know: 70th death anniversary of Gil Montilla
EDITORS' PICK
Alex Eala wins Grand Slam on Independence Day: ‘I hope I made my contribution to the country’
Kai Sotto continues to inspire Filipinos by sharing his passions and stories with Smart Prepaid
Ahead of ONE: Full Blast II, Mongkolpetch warns Elias Mahmoudi: ‘Watch out for my fists’
G7 rivals China with grand infrastructure plan
PNP, PDEA destroy P25.8M worth of marijuana in Kalinga
Rare earth metals at the heart of China’s rivalry with US, Europe
MOST READ
Groups slam Duterte ‘surrender’ to China
Chel Diokno, Bro. Eddie, Ate Vi decline 1Sambayan 2022 poll nomination
1Sambayan names 6 choices to pit vs Duterte’s anointed in 2022
‘Asian hate’ strikes anew: PH diplomat verbally harassed in New York subway
Don't miss out on the latest news and information.