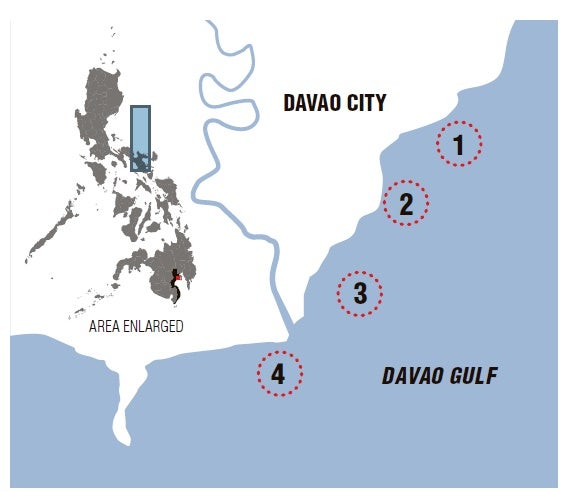 1) Off R. Castillo, Agdao 2) In front Magsaysay Park 3) Off Quezon Boulevard 4) Off Agro-Industrial Foundation College of the Philippines

DAVAO CITY, Philippines—Four artificial islands will be developed for mixed-use, business and residential purposes along the coastline under a P39-billion reclamation project that city government plans to undertake with a major private developer.

The joint venture agreement was signed by the city government and Mega Harbour Port and Development Inc. last month.

“There will be no relocation because President Duterte does not want to remove the people in the area,” said Councilor Danilo Dayanghirang, chair of the city council’s committee on finance and ways and means.

“He wants the residents to be part of the development,” he told reporters here last week.

The approval of the deal was among the last official functions of Mr. Duterte as mayor of Davao City.

Some 3,500 families live along the coastline between Barangay Bucana in Sta. Ana District and the adjoining Agdao District. Instead of being uprooted, Mega Harbour will even rehabilitate the pathways to their houses, Dayanghirang said.

The islands will have a total area of 214 hectares of land, according to Ivan Cortez, head of the Davao City Investment and Promotion Center.

On one of them, with an area of 75 hectares of land between Agdao and Sta. Ana, a 5-hectare government center and a port will be built. On another (39.24 ha), a central business district and a shopping center will rise.

The third island (59.47 ha) will be used for tourist centers and residential resorts, while the fourth (40.89 ha) has a township development plan.

According to Dayanghirang, Mega Harbour wants to complete the project within three to four years from start of construction. Originally, it set a 2019 deadline, but the documents required by law are still being processed, he said.

Both the city government and the developer are currently awaiting consent from the Philippine Reclamation Authority and an environmental clearance certificate from the Department of Environment and Natural Resources.

Mary Ann Fuertes, executive director of Interface Development Interventions, an environmental group, has expressed concern about the project’s impact on the environment and the communities surrounding the area.

Transparency should be observed to ensure that the ecosystem, as well as rights and safety of communities, are protected, Fuertes said.