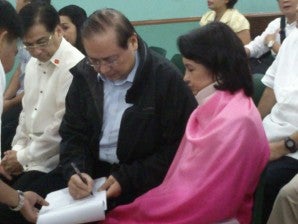 “Thank God. They took away six years of her life, (she’s) an innocent woman,” said Mike Arroyo in a brief statement.

The former first gentleman thanked his family and friends and local and foreign players for keeping the faith “through the trials brought about by unrelenting prosecution and defamation perpetrated by the previous regime.”

Bayan Muna Rep. Carlos Isagani Zarate said they were gravely disappointed with the high court’s decision and blamed the Aquino administration’s ineptitude for failing to pin the former president.

“More could have been done to strengthen the case and make the former president accountable. Unfortunately, it seems that the previous Aquino administration was merely contented in keeping her politically  paralyzed in the past six years rather than obtaining a conviction,” said Zarate.

While he considered this a setback, Zarate said that the campaign for accountability and against impunity should be carried out, not only against the Pampanga representative, but also former President Benigno Aquino III and his group.  SFM