PRESIDENT Duterte on Monday said his administration will not honor the historic Paris agreement on climate change which the Philippines adopted along with about 200 countries in December 2015.

The Chief Executive described as “stupid” the international treaty, signed by senior officials of the countries who attended the 21st Conference of Parties in France.

Speaking at the sendoff program for Filipino athletes bound for the 2016 Olympics in Rio de Janeiro, Brazil, the President said a foreign ambassador reminded him of the Philippines’ commitment to limit its carbon emissions.

He said he was angry with that ambassador and “wanted to kick him” when the diplomat asked him if the Philippines could maintain its carbon emissions.

“I said, ‘No. I cannot tell… You don’t do it that way, Mr. Ambassador. (Your country) had reached the apex (of industrialization) and along the way put a lot of contaminants and emission and went ahead in destroying the climate,’” the President said.

“We have not reached the age of industrialization. We’re now going into it. But you are trying stymie (our growth) with an agreement that says you can only go up to here,” he continued.

“That’s stupid. I will not honor that,” he added.

When the ambassador told him that the Philippines was a signatory to the agreement, Mr. Duterte said he replied: “That was not my signature. It’s not mine.”/ac/rga 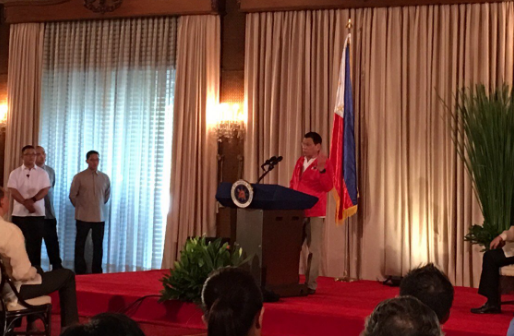 President Rodrigo Duterte speaks during the send off party for Filipinos athletes competing in the Rio 2016 Olympics. PRESIDENTIAL PHOTOGRAPHERS DIVISION