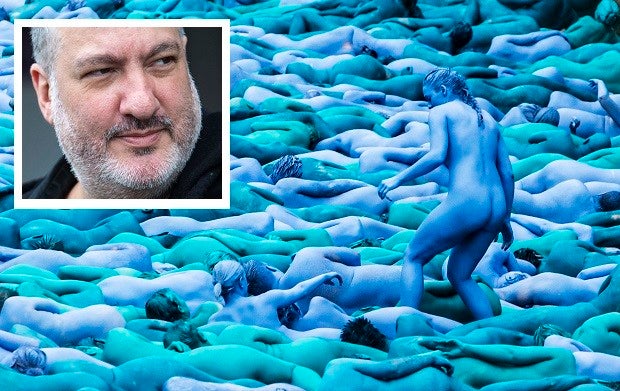 A participant maneuvers into position in a mass nude art installation entitled Sea of Hull by New York based artist Spencer Tunick (inset) in Hull, England, Saturday July 9, 2016. Thousands of people stripped nude and are painted various shades of blue to participate in a huge installation at various locations in the sea side city on England’s east coast, celebrating the citys maritime heritage. AP

CLEVELAND, United States — American photographer Spencer Tunick merged nudity and politics in a dramatic way Sunday in his latest work, posing 100 unclothed women for a shoot in sight of the Republican National Convention.

Tunick’s large-scale arty installation, “Everything She Says Means Everything,” featured women of all shapes, colors and sizes, holding up mirrors toward the arena where Republicans this week are set to formally name billionaire Donald Trump as their presidential nominee.

The artist is well known for his sometimes startling images of nude people. The women stripped down to their bare and often tattooed skin early Sunday and were seen snapping selfies with each other.

Tunick’s website said that the mirrors reflected “the knowledge and wisdom of progressive women and the concept of ‘Mother Nature’… onto the convention center, cityscape and horizon of Cleveland.”

But the artist has signaled that this shoot, near the arena where Trump is to be named the Republican nominee on Thursday, was political.

“There shouldn’t be a rhetoric of hate in a presidential election,” Tunick, 49, told AFP last month, speaking of the billionaire tycoon’s virulent diatribes against Mexicans, Arabs and women journalists, among others.

“I can’t just vote. I have to do something,” he said. “I think every artist in the United States should make an artwork before the election and get it out there.”

Size-wise, the artwork was a far cry from Tunick’s most recent effort, in Colombia in June.

For his largest installation in six years, he convinced more than 6,000 women to bare all in Bogota’s main square as the war-torn country neared a peace deal with the leftist rebels of FARC, the Revolutionary Armed Forces of Colombia.

Read Next
DOH makes mental health bill priority
EDITORS' PICK
UK’s Boris Johnson will resign, BBC reports
Unemployment rate up to 6% in May
Geek out at TOYCON 2022 powered by Smart Signature
High inflation: Your P1 is now worth only 87 centavos
High-risk pregnancy: Reducing your risk is in your hands
House energy committee chair Arroyo bats for cheap electricity
MOST READ
Suspect in grisly killing of missing woman in Bulacan arrested
Kim Atienza’s daughter flaunts bikini body in response to critics of her ‘revealing photos’
Number of active COVID-19 cases in PH breaches 11,000
Ex-Defense chief Lorenzana is the new BCDA chair
Don't miss out on the latest news and information.