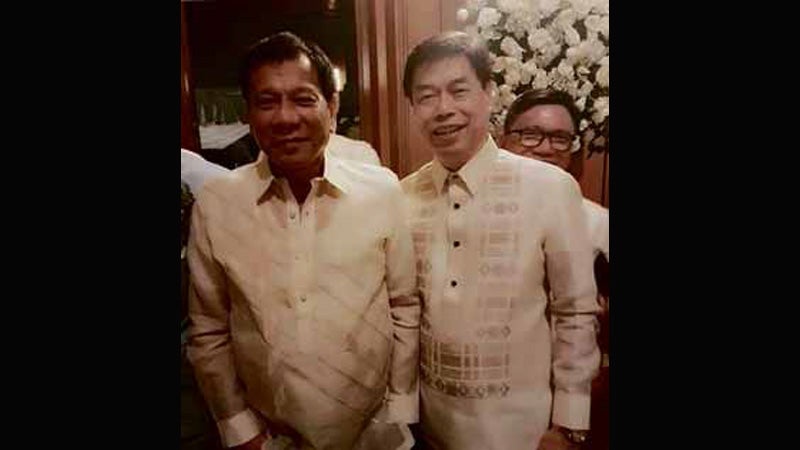 ‘KUMPARE’ President Duterte and Cebuano businessman Peter Lim, suspected to be a drug lord, are shown in this photo taken from the Facebook account of Facts Against Ignorance during the wedding of Israeli expatriate Yuri Ofek and Beatrice Borja in Lapu-Lapu City, Cebu province, on June 25.FACTS AGAINST IGNORANCE FACEBOOK ACCOUNT

CEBU CITY—Did Cebuano businessman Peter Lim and President Duterte know each other before their meeting in Davao City on Friday?

Lim and Duterte are “kumpare,” as they both stood as primary sponsors during a wedding at Shangri-La’s Mactan Island Resort and Spa in Lapu-Lapu City in Cebu province on June 25, according to Lim’s spokesperson, Dioscoro Fuentes Jr.

Fuentes called a news conference here on July 8 to deny that the businessman was the Peter Lim named by Mr. Duterte in an address on national television the day before as the one of the country’s top drug lords.

He said Mr. Duterte and Lim were among the principal sponsors at the wedding of Yuri Ofek, an Israeli expatriate who works as country manager of a local business outsourcing company, and Beatrice Borja.

“If you’ll look at it, my client and our beloved President are kumpare,” Fuentes told reporters.

Borja is the only child of businessman Fernando Borja, owner of Adnama Group of Companies and a close friend of Mr. Duterte who supported his presidential campaign, sources said.

The company is into export, mining and real estate, among other businesses.

The businessman hosted a thanksgiving dinner for Mr. Duterte at Level 8 in Adnama Building at the Mandaue Reclamation Area on June 8.

During the July 8 news conference, Fuentes said Lim had no plans of meeting the President to clear his name.

“The Peter Lim of Cebu is a very shy person. I don’t think he has the gall to ask the President for a meeting. Sending the President a letter is an option. But the decision shall come from him (Lim),” he said.

Apparently, Lim changed his mind and flew to Davao on Friday to see Mr. Duterte and to deny he was the drug lord named Peter Lim being sought by the police.

Photos of the two men were circulated online on Sunday, drawing sharp criticisms from netizens.

The Facebook page Facts Against Ignorance, which posted the photos, claimed the pictures were taken during the June 25 wedding.

The post read: “WAG MASYADONG NAGPAPABOLA SA DRAMA NILA (Don’t believe in their drama).” It also claimed that Lim was given due process by the President because they were kumpare and Lim was one of the contributors to Mr. Duterte’s presidential campaign.

It ended with a quote from Mr. Duterte’s message to Lim: “We want to help you, help us to clear you.”

But the President had defenders.

One of them was  ?Jag Bacalso Lucero, who said: “That pic was taken during the wedding of borja same date during victory party of cebu. C mayor is invited sa wedding … .” With reports from Doris C. Bongcac and Ador S. Mayol, Inquirer Visayas