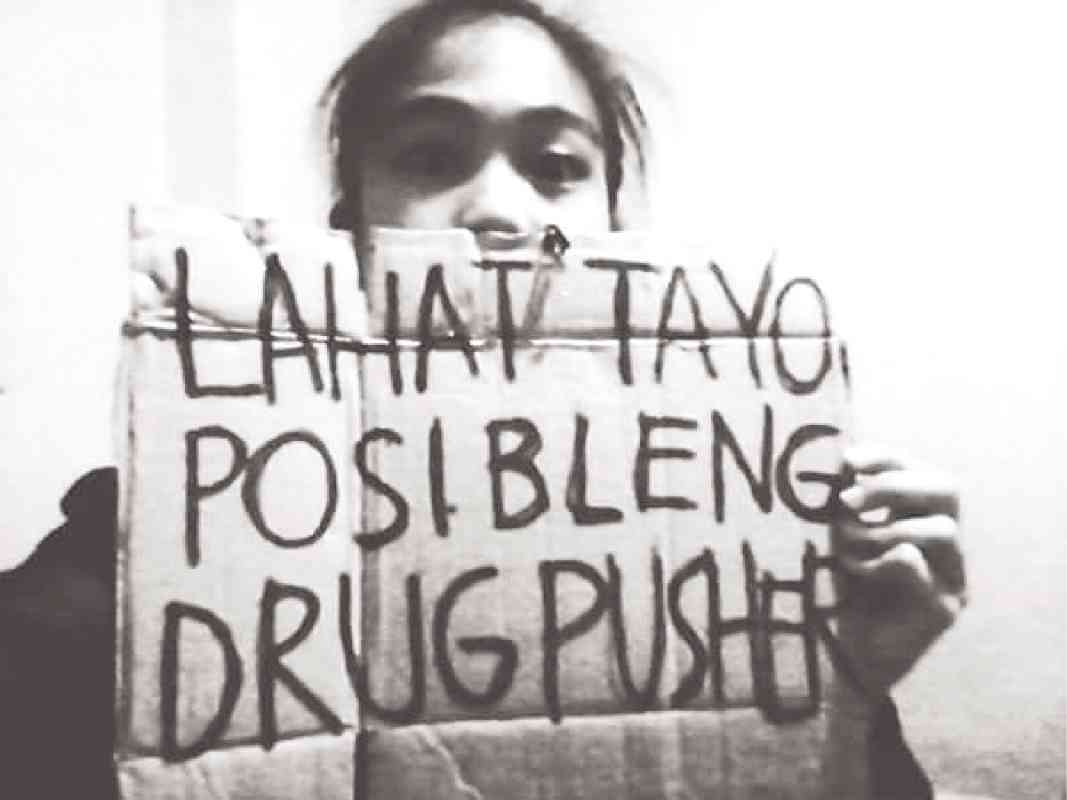 BOTHERED by the surge in the number of extrajudicial killings in the country over the past weeks, a University of the Philippines Diliman student decided to go out in public last Wednesday with a cardboard bearing the message “Lahat tayo posibleng drug pusher (We can all be drug pushers)” pinned to her shirt.

Adrienne Onday, a 19-year-old sociology student, said that she wore her “accessory” when she took the train from her house in Marikina City to De La Salle University in Manila, where she was to give a talk on student activism.

Her sign was patterned after the dozens found beside the bodies of suspected criminals or drug addicts dumped in the streets.

According to her, the #CardboardJustice campaign was started by her and her friend, Hope Swann, last week to call for a stop to the growing number of victims of extrajudicial killings following President Duterte’s declaration of an all-out war on criminality and drugs.

“My friend thought about the idea days before we took the campaign to the streets. I saw what she did and copied it that day because I knew I will be encountering a lot of people last Wednesday,” Onday told the Inquirer.

According to her, her sign drew a lot of reactions from fellow commuters. Some looked like they wanted to ask her questions but refrained from doing so.

Asked why she joined the protest, Onday explained that it attracted her interest as she was studying human rights in her sociology class. Another thing she learned was that labels about people were not an accurate way to describe who they were.

“When people are called rapists, criminals or drug pushers, it’s like you consider them animals and not human beings,” Onday said, adding that people who commit mistakes should be given a second chance instead of being killed without due process.

A posting of her experience on Facebook has, as of Sunday afternoon, gotten 14,000 likes and 4,800 shares.

Aside from Onday and Swann, two other friends have also started similar cardboard signs whenever they take to the streets.

“We are really glad for the attention because I think this is something that has not been done by those who are against the killings,” she said.

Not everyone, however, approve of her actions with some calling Onday an attention-seeker and her protest, a “stunt.”

“I don’t want to take them seriously. I try not to let them affect me but it gets to a point that these things have become exhausting to read,” she said.

Despite the negative reactions and her mother’s disapproval, Onday said she would continue her #CardboardJustice to get more people “to talk about what is happening and get the message to the people who can do something about this.”

She added that other organizations from UP and other schools had also expressed interest in joining her protest. “We will not stop until the number of those killed go down,” she told the Inquirer.