‘Marcos’ burial as a hero a terrible insult to history’ 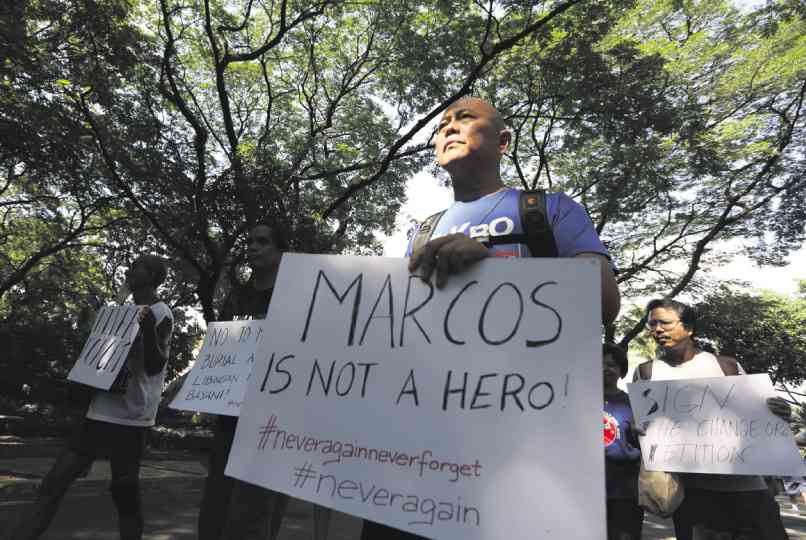 SAYING that Marcos’ burial as a hero would “create a big dark hole into which this country would sink,” a group of people led by running priest Fr. Robert Reyes participated in a protest run around the Quezon Memorial Circle in Quezon City on Sunday.

The burial of former President Ferdinand Marcos, “whom, in the minds of martial law victims, is a traitor and dictator, is a terrible insult to history and the country itself,”  Reyes said.

Dubbed “Takbo Na, Takbo No to Hero’s Burial for Marcos,” the activity was attended by members of Claimants 1081, an organization for martial law victims, and members of the multisectoral people’s organization Sanlakas.

Reyes told the Inquirer that the group had one common goal: Stop President Duterte from proceeding with the burial of Marcos at Libingan ng mga Bayani in Taguig City, because it would ruin the cemetery’s reputation as a resting place for heroes.

“The simple run was [to call] people to protect the integrity of the nation, history and national symbols and to preserve its integrity for future generations who need to stand on something solid,” he said.

Denny Caballero of Claimants 1081 and Karen Tañada, the grandaughter of former Sen. Lorenzo Tañada Sr., also shared their experiences during and after martial law after the protest run.

Karen Tañada formed the #NeverAgain group in the 1990s which documented the experiences of human rights victims during the Marcos years and shared it with succeeding generations.

Reyes said that the cause these people were fighting for would become a “farce” should  Marcos be buried at Libingan. “It [would render] empty the meaning of everything that martial law was,” he added.

According to him, the President may have made the concession in deference to his friend, Marcos’ son, Sen. Ferdinand “Bongbong” Marcos Jr.

However, Reyes noted that the symbol which Libingan represented was higher than politics and “cannot be subsumed  [by] friendships.”

“To let Marcos be buried as a hero is to create a big dark hole into which this country will sink. We cannot allow our country to fall into that political compromise,” he said.

Sunday’s activity, according to Reyes, was also a follow-up to the Bawa’t Bato initiative of the Martial Law Chronicles Project, Claimants 1081, UP Samasa Alumni and Nameless Heroes and Martyrs, whose members placed stones on which were written the names of martial law victims at the supposed grave site for the late dictator.

Participants in Sunday’s protest run said they would continue to oppose the proposed burial of Marcos Sr. at the Libingan while monitoring the moves of Mr. Duterte regarding the controversy. “We will block his decision to bury Marcos at Libingan. We cannot let history be massacred,” Reyes said.

Read Next
Pope prays for end to terror after Nice attack
EDITORS' PICK
Kai Sotto continues to inspire Filipinos by sharing his passions and stories with Smart Prepaid
1Sambayan to nominees: Stick to word of honor
EDITORIAL: Good news, bad news
Alex Eala wins Grand Slam on Independence Day: ‘I hope I made my contribution to the country’
Trust Robredo’s political instincts – Kaya Natin! convener
Ahead of ONE: Full Blast II, Mongkolpetch warns Elias Mahmoudi: ‘Watch out for my fists’
MOST READ
Duterte, Mayor Sara unlikely to run under same slate in 2022, says Lacson
PH to have cloudy, rainy Monday — Pagasa
1Sambayan to nominees: Stick to word of honor
China cautions G7: ‘small’ groups don’t rule the world
Don't miss out on the latest news and information.