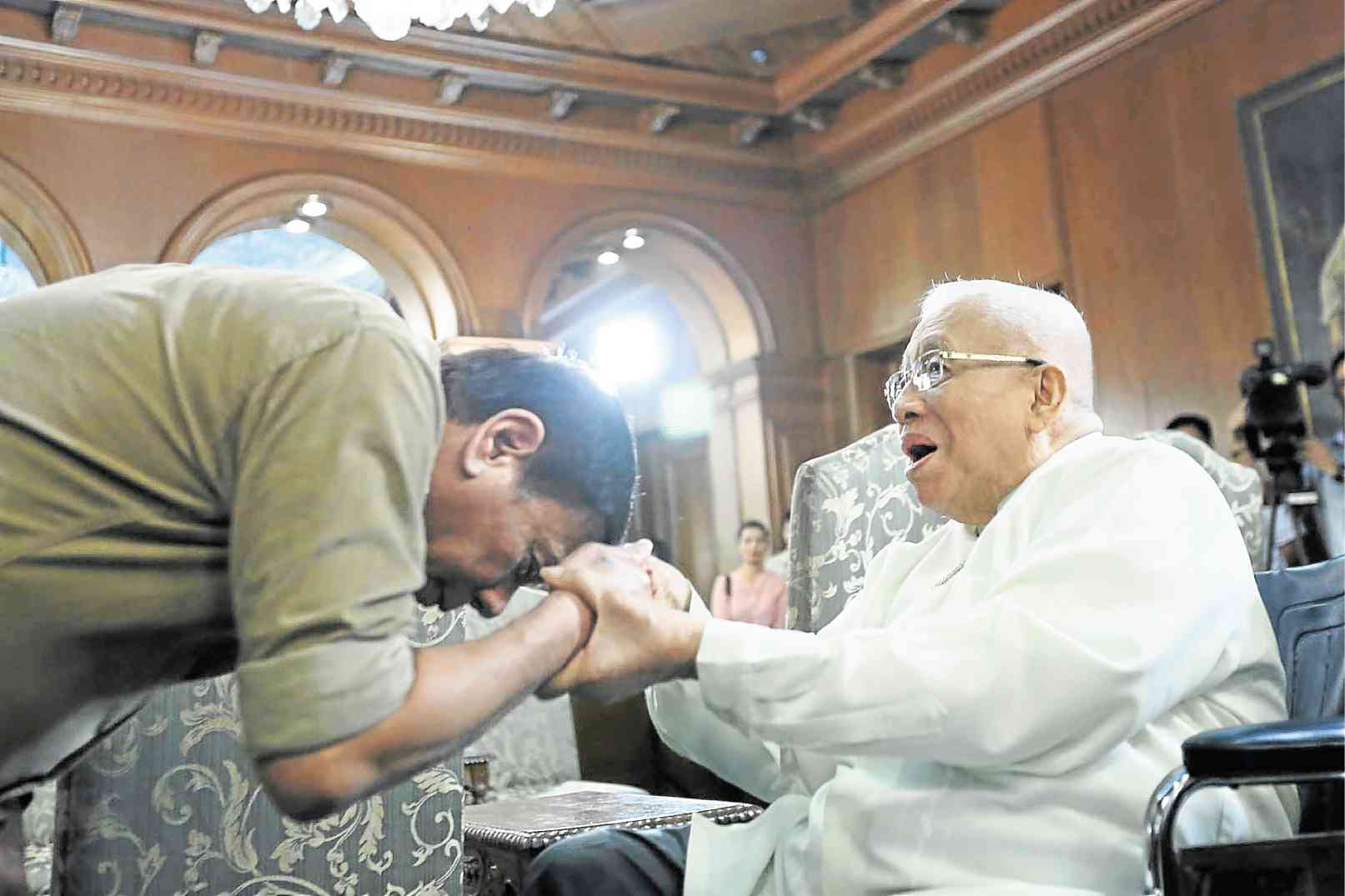 CEBU CITY—One of the most senior leaders of the Catholic Church came to visit President Duterte in what the Church official said was an attempt to “open the door of communication” between the Church and the President, weeks after Mr. Duterte launched his most vitriolic attack against bishops, whom he called “hypocrites” and “sons of bitches.”

Cebu Archbishop Emeritus Ricardo Cardinal Vidal, 85, one of the most senior leaders of the Church, visited Duterte in Malacañang and met with the President for nearly three hours last week.

On a wheelchair and accompanied by a nurse, Vidal met with Mr. Duterte to talk about many things, but not the ongoing war on drugs which the Duterte administration has launched and which has led to extrajudicial killings of suspects.

Vidal, however, said the meeting was enough to establish good rapport between the President and the Church.

In an interview in his retirement home in Sto. Niño Village in Barangay Banilad here on Friday, Vidal said there was no tension between him and the President.

Vidal recalled the scenes. When he arrived at Malacañang’s Music Room, Mr. Duterte bowed his head and kissed the cardinal’s hand.

“I didn’t want him to kiss my hand,” said Vidal. “I told him I should be the one to kiss his hand because he is the President,” the cardinal added.

“But he said No!, you are higher than me in rank because you’re a cardinal. I’m President of this country for just six years,” Vidal said, recalling Mr. Duterte’s words.

Vidal said Mr. Duterte lightened up when he heard the archbishop speak in Cebuano, a language Mr. Duterte is also fluent in.

“When I met him, I greeted him ‘Good evening, Mr. President.’ And he said, ‘Don’t you speak Tagalog? Why do you know how to speak Bisaya.’ And I told him I’ve been based in Cebu for sometime,” said Vidal, a native of Mogpog town in Marinduque province.

The cardinal said he found Mr. Duterte to be a “very simple and humble man.”

“He’s easy to talk with and you won’t be afraid to approach him,” he added.

The Church leader said he and Mr. Duterte exchanged jokes and spoke about their origins.

Had the President talked about plans that the Church opposes, Vidal said he would have said his piece.

“But we didn’t talk about any of his policies because it was just a courtesy call,” he said.

“I did not interfere [with his policies]. I just wanted to see him because he had fought with the bishops,” he said.

Although they met in some occasions in the past, Vidal said it was the first time he met and spoke with Mr. Duterte since June 30, the day Mr. Duterte assumed office.

He said it would be better for bishops not to trade barbs with the President because it would not be good for the country and the Church.

“We need to have a good relationship,” said Vidal. He said this was the reason the Catholic Bishops Conference of the Philippines, as a Church institution, kept quiet after Mr. Duterte’s tirades against Church leaders.

Vidal said he assured Mr. Duterte of his and the Church’s prayers.

“The President told me that he needs our prayers very much because it’s definitely not easy to be President of this country because there’s a lot of work to do and problems to address,” he said.

“I told him not to worry for we are all praying for him,” he added.

The cardinal said while he strongly supports Mr. Duterte’s war on drugs, he would want it waged legally.

“Families are broken and the future of young people is destroyed because of illegal drugs,” he said. “This has to stop.”