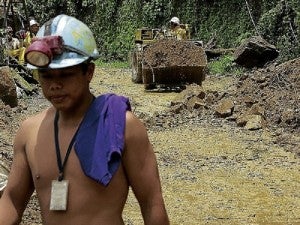 COTABATO CITY — The Department of Environment and Natural Resources (DENR) in the Autonomous Region in Muslim Mindanao (ARMM) has suspended all mining operations in the region in the wake of the conduct of performance audit on operating firms’ compliance with state policies on responsible mining.

President Rodrigo Duterte has taken a tough stance on mining and has said he wanted state policies and guidelines on responsible mining “strictly followed every step of the way.”

The DENR-ARMM issued the suspension order on all mining operations in the region after reelected Governor Mujiv Hataman made a similar policy statement during his assumption to office on June 30, said DENR-ARMM Secretary Hadji Kahal Kedtag.

But Kedtag said the directive was released only on July 12, when the agency had completely organized the task group that would conduct the performance audit  and review permits that the ARMM government had  granted to mining firms operating in the region.

Kedtag said Executive Order No. 79 titled “Institutionalizing and Implementing Reforms in the Philippine Mining Sector,” has provided for the “Policies and Guidelines to Ensure Environmental Protection and Responsible Mining in the Utilization of Mineral Resources.”

He said based on its charter and the mining laws, the ARMM has been issuing since 2002 permits for Mineral Production Sharing Agreement (MPSA) to some mining firms – including those operating in Simunul, Tawi-Tawi, namely, the Dasussalam Mining Co. (DMC), which shares MPSA with Al Tawi-Tawi Nickel Group (ANC); the Singcara Mining and Development Corp., which has its Mines Operating Agreement shared with the Pax Libera Mining Inc. (PLMI); and Chan C. Mining, which has a Deed of Assignment with the Hikanjay Mining, Inc.

Under risk of being issued closure orders, the mining companies would have to prove to the task group that they have faithfully complied with the required Environmental Protection and Enhancement Plans (EPEPs), Social Development and Management Plans (SDMPs), and Final Mine Rehabilitation and
Decommissioning Plans (FMRDPs), Kedtag said.

He said that on Hataman’s orders, the DENR-ARMM on Tuesday deployed the Tawi-Tawi the Task Group — composed of three officials of the agency working together with representatives of civil society organizations (CSOs) and institutions — to conduct a month-long audit on mining firms’ compliance with responsible mining requirements.