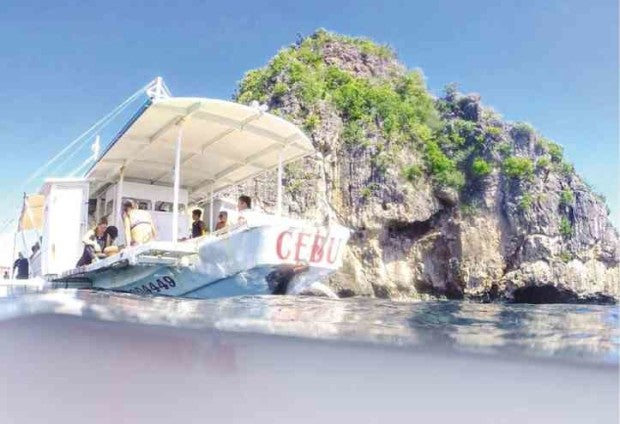 WHILE waters around this islet near Malapascua Island in Cebu province are known as dive spots, mystery surrounds the islet, known as Isla de Gato, as allegations swirl about its ownership by Vicente Loot, a retired chief superintendent and now Daanbantayan town mayor who had been tagged by President Duterte as one of the biggest drug personalities in the country.
DIVELINK CEBU/FACEBOOK

CEBU CITY—Two individuals tagged by President Duterte as among the biggest drug personalities in the country are facing what an official said is a validation of their tax returns by the Bureau of Internal Revenue (BIR).

Vicente Loot, former top police officer and now mayor of Daanbantayan town in Cebu province, and Peter Lim, said to be a Cebu-based businessman, are now targets of the BIR validation, according to laywer Neri Yu, chief legal officer of the BIR division 13.

Yu said the order to validate the tax returns of Loot and all individuals named Peter Lim in Cebu came from Herminio Palamine, BIR director for Central Visayas.

“The validation can also determine if there are undeclared (pieces of) property or income and if they have filed their income tax returns correctly,” Yu said.

He said the BIR regional office wants to be ready with results of the validation if the central BIR office demands it in relation to the ongoing investigation of individuals tagged by Mr. Duterte in the drug trade.

Mr. Duterte also tagged one Peter Lim and, in a later press conference aired by government station PTV-4, detained drug lords Peter Co and Herbert Colangco as the private individuals running some of the biggest drug operations in the country.

BIR’s Yu said all data on Loot and Peter Lim in BIR offices in the provinces of Cebu and Bohol would be checked.

A spokesperson said Cebu-based businessman Peter Lim is not the one being referred to by Mr. Duterte.

Peter and his brother, Wellington, had been subjects of a House inquiry on illegal drugs in 2001 but Dioscoro Fuentes Jr., Peter’s spokesperson, claimed his client had been cleared.

Fuentes said at least 100 persons, who registered as voters in 2001, are named Peter Lim.

As the BIR prepared its investigation, Loot denied online reports that he owned an islet off Malapascua Island in Daanbantayan town.

An online article in the website filipinewsph.com raised suspicision that Loot owned the islet.

Loot laughed off the allegation that no one is allowed entry to the islet because it is where drugs are being manufactured.

He said not many people go to Isla de Gato simply because “boats can’t dock.” “It doesn’t have a docking area,” the Daanbantayan mayor said.

The website that came out with the report, he said, is “fake.”

He said persons involved in drugs themselves may be behind the website.

He said tourists and divers visit Isla de Gato but fishing is banned there because it is a marine sanctuary.

Dennis Bryan Bait-it, executive director of Project Sharklink, a group based on Malapascua Island, said members of his group regularly dive in the area.

Sun Shimura, provincial board member and Loot’s stepson, said the online report about his stepfather owning Isla de Gato is a fabrication.

“These people are just making up stories,” said Shimura, saying the family would seek government help to stop the article from being circulated online.