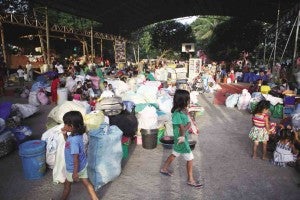 CIVILIANS CAUGHT IN FIGHTING: Scenes such as this one shown by a photograph taken on Feb. 17, 2015 in Pagalungan, Maguindanao, will be witnessed again in the province as the Army and the Bangsamoro Islamic Freedom Fighters have resumed clashes in the province. (FILE PHOTO BY JEOFFREY MAITEM / INQUIRER MINDANAO)

DATU UNSAY, Maguindanao – Three members of the Bangsamoro Islamic Freedom Fighters and a 15-year old girl were killed while two soldiers were injured when hostilities erupted here on Wednesday.

The military’s 34th Infantry Battalion, under Lt. Colonel Jimson Masangkay, launched offensives against the BIFF, led by Commander Bungos, after they were sighted in the outskirts of Barangay Meta before dawn Wednesday.

Petinglay said Fatimah Elian, 15, of Barangay Meta, was killed by stray bullets during the firefight.

“We were awakened by massive gunfire, we were forced to flee to the town gymnasium,” a 45-year-old evacuee said. “We left hurriedly because the gun fire were so close to us, we left some of our valuables behind,” she added.

About 200 families are now housed at the Datu Unsay public market and covered court while the military clearing operations continue.

Civilian motorists said the fighting was so close to the national highway and soldiers shut down the road network for about an hour, beginning at 9 a.m.

Abu Misry Mama, BIFF spokesperson, said his group was only defending its position in Barangay Meta.

“The military attacked us so they suffered five casualties,” he said in Filipino in a phone interview.

Mama denied his group lost three fighters but admitted that four of their men were injured in the clashes.

It was the first eruption of hostilities involving the two groups since March this year when the Army wrestled Barangay Butilen in nearby Datu Salibo from the control of the BIFF.  (With a report from Karlos Manlupig, Inquirer Mindanao)  SFM