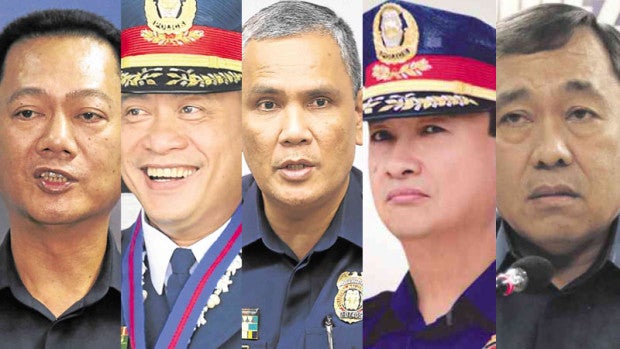 Interior and Local Government Secretary Ismael Sueno had asked the Department of Justice to place the five generals accused of engaging in illegal drug trade on the Bureau of Immigration’s watch list.

“We are hoping that this would be relayed to the Bureau of Immigration and Deportation (BID) soon and a watch list order be issued immediately so that we would know the destinations of these generals in the event that they would be leaving the country as well as their purpose in going abroad,” the secretary said.

In his request, Sueno cited the ongoing investigation by the National Police Commission (Napolcom) against Garbo, Diaz, Loot, Pagdilao and Tinio after President Rodrigo Duterte publicly identified them as coddlers of drug lords.

READ: Dela Rosa: Duterte has nothing to gain in exposé of PNP generals

The reason for the request, according to Sueno, was to ensure that the” extensive investigation on their supposed illegal drug connections would run its course and be completed immediately.”

“At this crucial time when the issue about their alleged involvement in the illegal drug trade is being investigated, we would actually prefer that these generals would not be able to leave the country,” he said.

Under the Section 2 of DOJ Circular No. 41, the Justice Secretary may issue a watch list order against any person, either motu proprio, or upon the request of any government agency in connection with any investigation being conducted by it, or in the interest of national security, public safety or public health, among others. CDG

Palace: 5 generals got ‘due process’