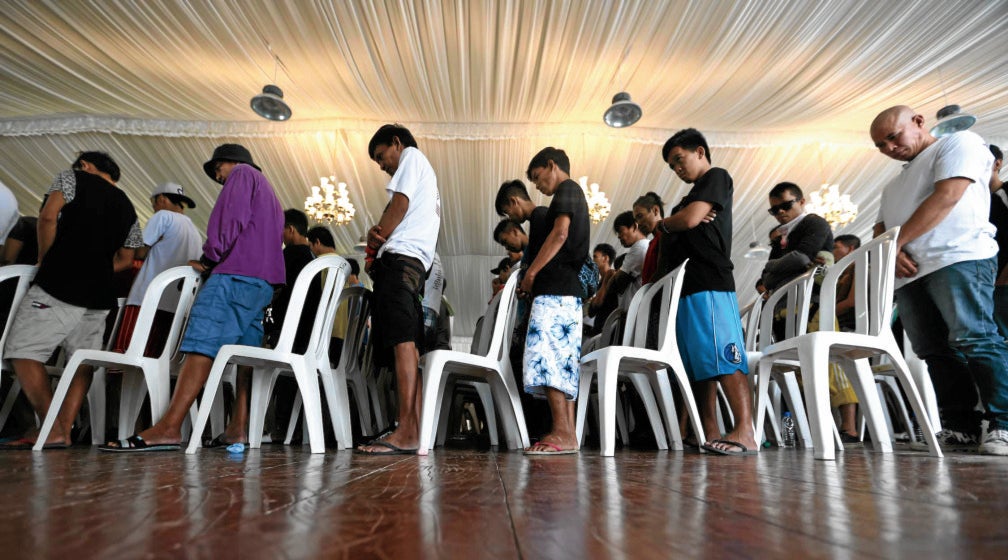 Drug users from different barangays in Taguig City who had voluntarily surrendered and signed certificates to cease their involvement in illegal drugs pray during the launching of Project Tokhang at the Lakeshore Tent, Barangay Lower Bicutan in Taguig City. INQUIRER FILE PHOTO/LYN RILLON

JUST like the parable where the shepherd goes after the sheep that has gone astray.

The Catholic Church said it welcomed with open arms the thousands of drug dependents who had turned themselves in—that is, even if it had no means to provide them physical rehabilitation.

An official of the Catholic Bishops’ Conference of the Philippines (CBCP) said the Church could give spiritual direction to these drug users who surrendered to the Duterte administration.

“Since rehabilitation requires a wholistic intervention, the Church can provide counseling and spiritual direction geared toward a deep understanding of life, its travails and meaning,” said Fr. Jerome Secillano, executive secretary of the CBCP Permanent Committee on Public Affairs.

Secillano admitted that the Church might not be equipped with the infrastructure to rehabilitate drug dependents.

But he said the Church could intervene by providing counseling to the families of drug dependents who may have been adversely affected by substance abuse.

And just like the Church, the local government believes in second chances.

The younger set, particularly students, are spared of the humiliation of being kicked out of school or brought to the police.  They are treated as victims.

John (not his real name), 22, was among the top students in his class before he was lured into drug use when he was 15. He pointed to peer pressure and insecurities as the factors that drove him to give illegal drugs a try.

Everyday for six months, he experimented on illegal drugs on the school’s rooftop. He set aside part of his P50 daily allowance to buy drugs.

That went on until he was caught at Manggahan High School after a schoolmate tagged him the source of marijuana in school.

“I was shocked when I was caught. I thought that would be the end of my life. I was afraid,” John said.

But through the Kasunduan Program of Pasig City’s antidrug abuse council with the police, led by Zenaida Concepcion, and the support of his parents, John’s life was spared.

In Pasig City, students caught using, pushing or in possession of illegal drugs are given a second chance through the local government’s Kasunduan program, now spearheaded by Mayor Robert Eusebio.

Since 2004, 154 students engaged in illegal drugs benefited from the program.

Part of the rehabilitation program are counseling, spiritual intervention and leadership seminars, intended for the student’s lifelong and sustainable recovery.

“We do not kick them out. That would have a worse effect to the students. Instead, the council makes sure the students are given proper intervention and opportunity to finish school after the rehab,” Concepcion told the Inquirer.

The city’s antidrug abuse council also enlisted John to the city’s cash-for-work program where he was able to earn P6,000 a month, just right for him to save up for the next school year. After his rehabilitation, he was able to get scholarships to finish college.

Now, John is about to take his board exams after finishing criminology at the University of Manila.

The same fate befell Jessica who is now a bank teller in Pasig.

Jessica was caught in possession of 17 sachets of marijuana in school in Barangay Pinagbuhatan in the city, herself showing signs of drug abuse. His brother was earlier arrested for the same offense.

Through the Kasunduan program, however, she finished a business course at Pamantasan ng Lungsod ng Pasig and now works in BDO.