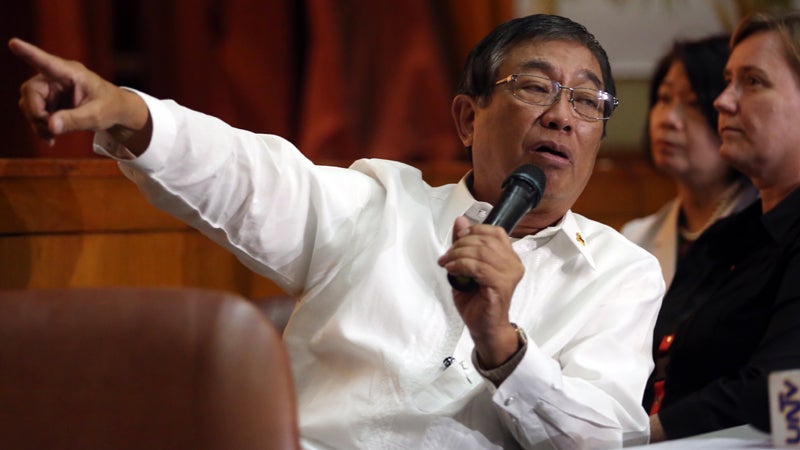 FORMER Secretary Enrique Ona and two of his then subordinates in the Department of Health (DOH) were indicted by the Ombudsman for graft in connection with the alleged anomalous P392.2-million modernization program of the Region 1 Medical Center (R1MC).

In a statement issued on Monday, Ombudsman Conchita Carpio Morales said there was probable cause to charge Ona, former Undersecretary Teodoro Herbosa and former Assistant Secretary Nicolas Lutero III with graft for violation of Section 3(e) of the Anti-Graft and Corrupt Practices Act or Republic Act No. 3019.

The three were also found guilty of the administrative offense of grave misconduct for which they were dismissed from the government service, perpetually disqualified from holding public office, and forfeited their retirement benefits. In case of separation from the service, the penalty is convertible to a fine equivalent to a respondent’s one-year salary.

The Ombudsman said that Ona and the others gave undue advantage to Specified Contractors and Development Inc. (SCDI), which had lost the bidding for the modernization of R1MC.

According to the Ombudsman’s investigation, EM Cuerpo Inc., the lowest bidder, and SCDI, the second-lowest bidder, were postdisqualified for failure to comply with the detailed estimate of requirements for the P392.2-million R1MC modernization program implemented by the DOH in 2012.

This compelled the SCDI to file a motion for reconsideration that was denied by the Special Bids and Awards Committee (SBAC).

The third-lowest bidder, Northern Builders Inc., was awarded the contract in August 2013. SCDI did not file a protest then as provided for under the Government Procurement Reform Act or Republic Act No. 9184.

However, that month SCDI instead filed a letter of complaint before the Office of the President alleging anomalies in the procurement.

In September 2013, Ona instructed R1MC chief Dr. Joseph Rolando Mejia to give him an update on the project.

In a letter dated Sept. 16, 2013, then Undersecretary Herbosa wrote to Mejia asking him to nullify or set aside the issuance of the Notice of Award to winning bidder Northern Builders and continue with the postqualification of SCDI.

On Sept. 30, Ona issued a cease and desist order to Mejia pending investigation of the SCDI complaint.

Three months later, the DOH held a rebidding of the project.

In her resolution, Morales said the decision by the bids and awards committee to award the contract to Northern Builders should have become final and executory when SCDI failed to file a protest or appeal.

Sought for comment, Lutero expressed surprise at his inclusion in the graft charges, saying it was he who conducted an investigation based on a Malacañang directive on the multimillion contract for the modernization of the R1MC.

“After the investigation, we made a recommendation, and then Ona took action on the report. They ordered the cancellation of the award and ordered a new bidding,” Lutero said in a phone interview.

Lutero said he had filed a motion for reconsideration questioning the Ombudsman’s finding of probable cause against him, Ona and Herbosa.